CUNA leader reflects on the strength of CUNA and the CU movement. 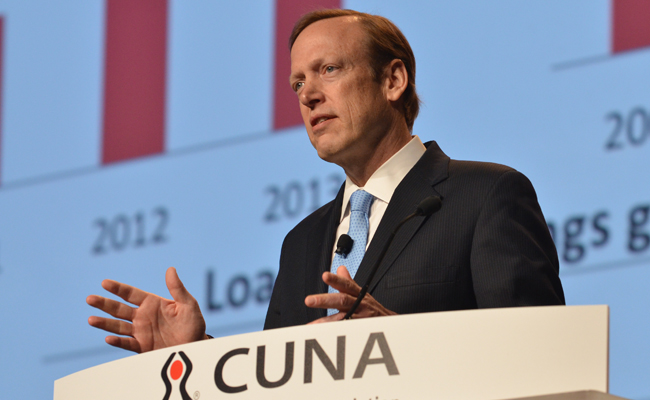 In March, CUNA President/CEO Bill Cheney announced he would be stepping down to become the new CEO at SchoolsFirst Federal Credit Union in Santa Ana, Calif.
As Bill concludes his tenure at CUNA next month, Credit Union Magazine asked him to reflect on the accomplishments and memories of his term in office.
What were CUNA’s most significant accomplishments during your tenure as CEO?
Looking back on the past four years, we’ve made some important progress. But without a doubt, protecting the credit union tax exemption was the most impactful. Good defense is not what scores points—at least not on a regular basis—but it can win games.
I’m incredibly proud of the way the team at CUNA, the leagues, and our member credit unions—and their members—rallied behind this effort. Lawmakers heard from us at every level—more than 1.3 million contacts. That’s impossible to ignore. So by far I would say the Don’t Tax My Credit Union effort was a big win for CUNA.
We’ve also built on CUNA’s longstanding position as a political powerhouse. The combination of our leagues’ efforts at the state level and the constant engagement on legislative and regulatory efforts at the national level gives us tremendous strength and credibility with policymakers in Washington, D.C.
Last year was our best off-election year ever for contributions to our political action committee, CULAC (Credit Union Legislative Action Council). We’ve made it clear that we support candidates who support credit unions. And that has allowed us to have very meaningful dialogue as candidates gear up for the 2014 elections.
On a broader basis, looking at these past four years, I think we’ve energized the movement. Our largest group of supporters—4,400—come to Washington, D.C., in February for our Governmental Affairs Conference (GAC). There’s a palpable vitality emerging with hundreds of thousands of Americans joining our movement each year—discovering that credit unions are their best financial partner. We set that as our vision and created tools and programs to support it. And it’s renewing the credit union movement in a way I’ve not seen for a long time.
What did you find most challenging in your role?
That’s an interesting question, because what’s most challenging about this job also can be the most rewarding. There’s never, ever, a dull moment. On any given day, we’re dealing with myriad issues that can potentially have a big impact on credit unions and 99 million Americans. And even when the government isn’t working, those issues still require attention.
I’ve been on the association side for eight years now, first at the state league level and the past four years at the national level. What has been most challenging overall is to see the layer upon layer of legislation and regulation policymakers have added, with little regard for practicalities.
While most policies start out with good intentions, they become very complicated as they move through the process. The consequences of much that happens in Washington create real and constant challenges, and we have to stay vigilant.
What are you going to miss most and least?
Honestly, I won’t miss the partisan politics. But I will miss Washington, D.C. and so many of the people that I’ve met and worked with here. We don’t always agree on specifics, but I appreciate the time and attention given to credit unions by Chairman Debbie Matz and other members of the NCUA Board and staff.
Similarly, Consumer Financial Protection Bureau Director Richard Cordray and his team have been open and accessible, and always willing to listen to our concerns.
I’ve also met literally hundreds of lawmakers and while they seem to have a hard time working across the aisle, they’ve always been willing to listen to our concerns and views on credit unions and the amazing work that credit unions are doing for their constituents.
My wife Crissy and I have enjoyed the history and culture of the city and all of the surrounding areas. Living and working in the nation’s capital reminds me every day of how important our democracy is, even when it’s messy. It’s something we have the power to shape and we must stay informed and engaged.
I will also miss the opportunities I’ve had to visit credit unions all across this country. In four years, I’ve traveled hundreds of thousands of miles and met with credit union leaders and members from every state. I’ve been inspired to see cooperative principles and philosophy in action in so many innovative ways. And I’ve seen where geographic and cultural differences create different challenges. It’s been a great opportunity to understand where we are as a movement and what challenges and opportunities are ahead.
And while I will miss working with the CUNA team in Washington, D.C., and in Madison, Wis., on a daily basis, I look forward to being a member of the California Credit Union League and CUNA and supporting their efforts as a credit union CEO.
But I have to say, as I move back to Southern California aft er this winter, I will not miss shoveling snow!

NEXT: What strengths should the movement build upon to ensure its future growth and vitality?
Previous 1 2 Next
KEYWORDS Bill Cheney cuna