Member Benefits
Learn more
Learn more about the benefits of membership.
Home » Data Security: How Much Will EMV Help?
Operations

Data Security: How Much Will EMV Help?

Will new fraud-fighting technology be enough to thwart threats such as the Target data breach? 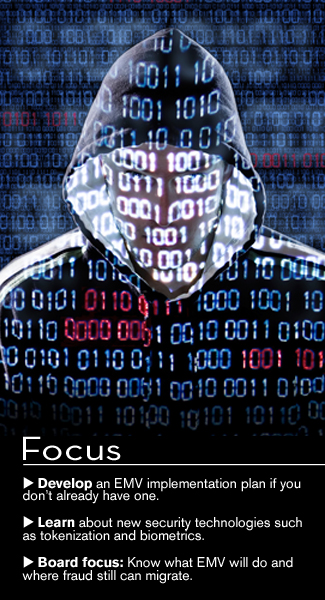 Consumer confidence in online security is shaken after high-profile data breaches at Target, Michaels, Nieman Marcus, and others. Almost 25% of U.S. consumers have stopped buying online entirely, according to a USA Today survey, while 56% are limiting the number of Internet sites they use.

And more than half of consumers surveyed are logging on to their banking, investment, and credit card sites more often to verify their money is safe.

This all might be a temporary reaction, analysts say, but one thing is clear: These high-profile breaches heightened security awareness for millions of consumers. Retailers and the financial services industry must respond.

“This went from an industry issue to a consumer issue. It’s front-page news,” explains Josh Gilbert, principal of First Annapolis Consulting. “And suddenly because of these merchant breaches, the industry started to worry about consumer confidence in the payments system itself.”

Ramping up for EMV

The Target breach hit credit unions hard, a CUNA survey reports. This one event cost credit unions an estimated $30.6 million as of February 2014. Much of this cost was the result of credit unions having to reissue about 4.6 million credit and debit cards at an average per-card cost of $5.68. Nearly all of the more than 1,100 credit union respondents to the survey were notified by their processor or network that some of their members’ cards had been affected by the breach.

That’s one of the reasons financial institutions are ramping up their EMV conversion and implementation plans, experts say.

EMV stands for “Europay, MasterCard, and Visa” and represents the chip technology standard used extensively worldwide but until now, sporadically in the U.S.

The implementation delay in the U.S. stems, in part, from the complexity of the payments market, which is large and has many more card processing networks than the rest of the world, says Gilbert. And the business case for transitioning member credit and debit cards to EMV has been a major hurdle. Credit unions often question whether the costs of EMV conversion will outweigh the security benefits. Industry experts estimate chip cards could cost as much as $10 more per card than the magnetic stripe cards in use today.

But despite these EMV apprehensions, you can’t ignore it anymore. “Target happened,” he says, and the payments industry is moving forward, largely because “merchants and issuers feel compelled to do something.”

“If you’re not executing [an EMV strategy] at this point, you need to get there soon,” he adds. “The big fear of being last is that the fraudsters are going to pick on the weakest link in the chain. If you stay mag stripe, the potential for fraud only rises.”

Another concern is the competition: If all the big banks have chip technology on their cards, members and potential members could question the security of credit unions’ existing non-EMV cards, and “you don’t want that perception creeping into the minds of your members,” especially after these recent breaches.

NEXT: EMV not a panacea