Member Benefits
Learn more
Learn more about the benefits of membership.
Home » Simon Sinek: ‘Be the Leader You Wish You Had’
Directors Management
America's CU Conference

Simon Sinek: ‘Be the Leader You Wish You Had’ 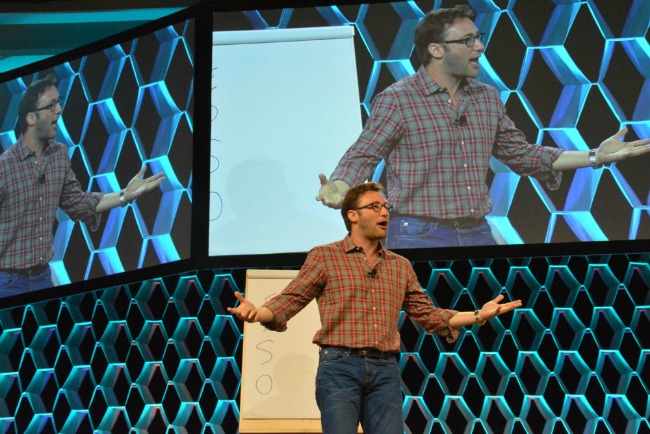 A title does not a leader make.

True leaders are those who put the needs of others before themselves and willingly make sacrifices and take risks for the good of all, leadership expert/author Simon Sinek told America’s Credit Union Conference attendees during Tuesday’s General Session.

“I know some people at the highest echelon who aren’t leaders,” he said, “and people at the lowest who are. It’s all about looking out for others.

“The reward of leadership is to see others achieve more than you do,” Sinek continued. “It’s like being a parent.”

As a parent would protect a child from danger, so must leaders shield employees from harm with what Sinek calls a “circle of safety.”

When people feel safe, their natural disposition is toward cooperation and trust. When employees don’t feel safe, they partake in nonproductive—even destructive—behavior.

“Leaders set the tone—they decide what environment you’ll have,” Sinek said. “If there’s no circle of safety, people feel they have to protect themselves from each other. Anytime someone feels compelled to write a CYA email, this is a sign they don’t feel safe from their own people—they’re literally spending time to write an email to protect themselves as opposed to committing that time and energy to serve the organization.

When the bottom line is prized above all else, people don’t feel safe, they don’t trust each other, and they know they’re disposable. This is where credit unions have an advantage over their for-profit competitors, he said.

“Credit unions are human organizations,” Sinek said. “This makes them empirically better than banks, which are all about the numbers. The credit union model has nothing to do with rates. It’s a human enterprise, where you make sacrifices for the sake of employees and members. That’s why I’m a credit union member.”

People can practice positive leadership every day by making others feel that they matter, Sinek said. “Be the leader you wish you had.”