CUs can continue to accomplish remarkable feats, now and into the future, Dennis Pierce says. 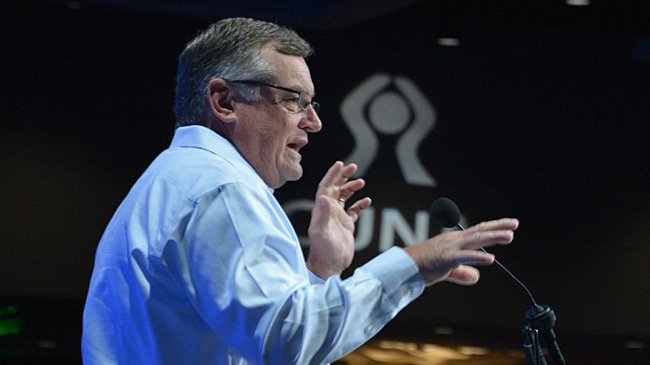 The early pioneers of the credit union movement, the likes of Edward Filene and Roy Bergengren, probably never dreamed that credit unions would ever touch 100 million memberships, a milestone the industry expects to realize later this year.

Back then, 80 years ago when the credit union movement began to gain steam, there may not have been many more than 100 million people living in the United States.

Dennis Pierce, CUNA board chair, highlighted this achievement as he addressed a massive audience at CUNA’s 2014 America’s Credit Union Conference Wednesday to back up his belief that credit unions can continue to accomplish remarkable feats, now and into the future.

“If we’re valid, if we have a purpose, and if we’re providing something unique to Americans, I think credit unions have an opportunity to look back 80 years from now and celebrate similar kinds of success that we’ve had up to this point,” said Pierce, who’s also the CEO of CommunityAmerica CU, Lenexa, Kan., with $1.9 billion in assets.

In the chairman’s speech, Pierce outlined specific numbers he believes the industry can conquer in the short term. By 2023, he believes credit unions can lock in 55 million primary financial institution members and expand member financial value to $20 billion.

One way to reach such goals, Pierce said, is to continue to aim for the vision the industry has developed: Americans choose credit unions as their best financial partner.

Credit unions also will have success if they continue to put together coordinated efforts such as the “Don’t Tax My Credit Union” campaign, which helped the industry maintain its tax-exempt status earlier this year, Pierce added.

“We had one-and-a-half million contacts sent to Congress,” Pierce said. “Those of you who have any awareness of what that number means to an elected official: That makes a difference. That’s something they pay attention to.

“We continue to have record numbers of attendees at our Governmental Affairs Conference,” Pierce added. “I think that’s reflective of your work, your engagement, and understanding the importance of making sure that we not only protect what we have, but that we establish an opportunity for us to have a future.”

Pierce also recognized the work CUNA continues to do on behalf of the credit union industry, specifically calling out Bill Hampel, interim president/CEO, for taking the helm during this transition period while the organization considers candidates to become the CEO.

“I think from his comments yesterday you can tell that our organization is in great hands, and we’re not missing a beat in terms of where we’re headed, in our focus and our ability to represent credit unions, and ultimately credit union members, and providing value back to them as part of what the association does,” Pierce said.

Pierce also noted that the board is actively searching for a new CEO and believes by this fall, they will have selected the person to succeed Bill Cheney, who stepped down from his post as the head of the trade association in June.

“But ultimately, our target is to make sure that we find the right person,” Pierce said. “This organization deserves leadership at a level that can take it where you need it to go, in terms of your needs as members of CUNA.”

Be sure to visit Credit Union Magazine and News Now for more ACUC action in San Francisco. You can also follow ACUC on Twitter using the handles and hashtag below: