Member Benefits
Learn more
Learn more about the benefits of membership.
Home » Who Are Your Members?
Marketing

Who Are Your Members?

There’s no such thing as an “average” credit union member. The level of diversity within each credit union’s field of membership is a function of its community and region. 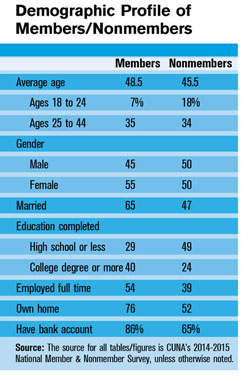 Looking at membership demographics at the national level provides a reference point you can use to evaluate your own membership. “Our national research helps credit unions discover the demographic segments that represent their greatest opportunities and challenges,” says Jon Haller, CUNA’s director of corporate and market research.

Members have a wide variety of financial needs, and those needs are constantly changing and evolving throughout their lives as they buy cars or homes, pay for college tuition, or plan for retirement.

For most members, their credit union is just one option for meeting their financial needs. CUNA’s survey shows that 86% of members also are bank customers, while 65% of nonmembers use banks.

The challenge is to increase loyalty levels among your members so they’re more likely to turn to your credit union the next time they need a financial product or service.

Total credit union membership approached 97.5 million at the end of 2013, according to CUNA. That represents a 2.5% annual growth rate for 2013, compared with 2.1% for 2012. These are net growth rates, notes Haller, which take into account new members as well as those who leave.

“Those two years represent the highest back-to-back annual membership growth rates in more than a decade,” Haller says. “The 2013 growth continues the small but steady rise we’ve seen each year since 2010, when the growth rate was only 0.7%.”

Membership growth continued in the first four months of 2014, with the total reaching 99.6 million. This represents a 2.9% growth rate over the previous 12 months.

Members come and go, of course, for various reasons. One challenge for credit unions is to welcome new members, serve them well, and retain them. Offering the right mix of products and services is key.

Making sure members understand the credit union difference— and that they see genuine proof of that difference whenever they conduct business with their credit unions—also motivates them to retain their membership. 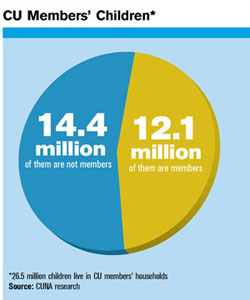 The future borrowers of today (ages 18 to 24) are the peak borrowers of tomorrow (ages 25 to 44). This underlines the importance of attracting younger members.

CUNA economists say credit unions can expect a resurgence of lending activity over the next few years. Following the recession, consumers are ready to start borrowing again to replace worn-out vehicles and major household appliances.

Credit unions with high percentages of future and peak borrowers are well-positioned to take full advantage of this lending resurgence.

The survey reveals another significant opportunity in yet another demographic group: those younger than age 18 living in your members’ homes. These are your members’ children, and there are about 26.5 million of them. Of these youth, 12.1 million are members, but 14.4 million are not.

Imagine the benefits—present and future—of turning these 14.4 million young nonmembers into members. Accomplishing this goal could go a long way toward increasing the percentage of future borrowers and ultimately peak borrowers in credit unions.

“Credit unions need to think about offering incentives to members to open accounts for the children. There’s a good chance that many of their children will become loyal, life-long members.”