Members’ Balance Sheets on the Mend

Few credit union members live their lives free of financial worry. The recent recession dealt many of them a serious financial setback, from which they’re still recovering.

Older members who were approaching retirement in 2008 decided to stay in the workforce longer than they had anticipated so they could rebuild their retirement savings. Younger members found it difficult to land entry-level jobs. And most of the jobs created following the recession have been lower-paying jobs in the service sector.

For the first time, CUNA’s 2014-2015 National Member and Nonmember Survey—sponsored by Credit Union Magazine—asked members about their general financial condition compared with two years ago.

About 40% of members say their household balance sheets are better than they were two years ago, about 40% say they’re about the same, and about 20% say they’re worse.

He points to a May 2014 Gallup poll, for instance, showing only 41% of Americans think the economy is getting better, while 53% think it’s getting worse.

“And among millennials,” Schenk says, “that proportion climbs to nearly two-thirds.”

Various economic indicators and growth projections, however, don’t reflect the general consumer malaise. “We expect the economy to grow about 3% this year, and 3.75% in 2015,” Schenk reports . “Those are pretty strong numbers.”

“We also know from Federal Reserve data that consumer balance sheets are in much better shape today,” Schenk says. “Household net worth is at record levels, whether in nominal terms or adjusted for inflation.”

With all of those positive economic indicators, why does pessimism prevail among so many consumers?

For example, economic reports generated by government agencies show household disposable income has increased a robust 17% since the start of the recession.

But when you adjust that number for inflation, the increase is only 6%. And if you subtract stock dividends and rental income, which favor the wealthy, the adjusted-for-inflation increase in household income falls to the break-even point.

“For most households,” Schenk says, “the increase in household income has been modest and much lower than average from a historical perspective.” 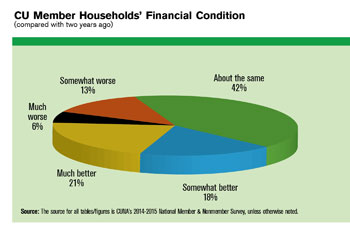 Similar trends surface in the conventional unemployment rate, which doesn’t reflect the fact many people have given up on trying to find work.

Others are working part-time, so they’re not classified as unemployed, even though they want— and need—to find full-time employment.

“If you look at the U6 rate, which is the broadest definition of unemployment and includes the ‘underemployed,’ the unemployment rate is about 12.3%, not 6.1%,” says Schenk.

While the economy has added jobs, and non-farm jobs have returned to prerecession levels, four million construction and manufacturing jobs were lost during the recession, Schenk says.

The result is a scenario he describes as “job polarization,” in which higher-paying, higher-skilled jobs show gains, while less-skilled jobs decline.

It’s the loss of these less-skilled manufacturing and construction jobs that dealt the middle class such a severe blow during the recession.

“This situation is problematic and it contributes to the gloomy outlook shared by many consumers,” says Schenk. “The middle class is still muddling through.”