If you sat down with 10 people who aren’t credit union members, chances are only one of them would be “very familiar” with credit unions, according to CUNA’s 2014-2015 National Member & Nonmember Survey, sponsored by Credit Union Magazine.

This situation is frustrating and perplexing, especially in light of all the accolades credit unions have received during the past few years in the national media.

Despite all the positive reviews, credit unions still find it a challenge to increase awareness levels among nonmembers and bring them into the credit union fold. “For every person out there who is benefiting from credit union services today, there are two others who could be,” says Jon Haller, CUNA’s director of corporate and market research.

Credit union efforts to attract more members are ongoing. Most credit unions are focusing their efforts on attracting younger members. Only 14% of people ages 18 to 24 belong to credit unions, according to CUNA’s survey.

But awareness remains a huge hurdle. Only 7% of young adult nonmembers say they’re “very familiar” with credit unions. Credit unions must communicate that they have what young adults want in financial products and services.

A 2014 study by BancVue looked at Generation Y (ages 18 to 34) consumers’ preferences when selecting financial institutions. The study found that:

• 85% say customizable rewards programs are at least somewhat important; and

To appeal to this tech-savvy demographic, credit unions must provide these types of services, as well as other services such as credit builder cards and remote deposit capture. The younger portion of Gen Y—those ages 18 to 24—also need student loans.

Beyond products and services

Credit unions are finding additional ways to reach out to this market. For example, $1.7 billion asset UW Credit Union, Madison, Wis., partnered with the University of Wisconsin (UW) to create a series of life-skills courses focused on personal financial management.

The series, scheduled to roll out in spring 2015, will include three one-credit courses for UW students. In addition, every year the credit union provides many free financial education seminars aimed at both students and faculty.

“Such efforts build rapport with young adult members and potential members,” Haller says. “They come to think of the credit union as not merely a financial institution, but a financial partner.”

Gen Yers appear to be less concerned about what credit unions do than how they do it. They place a high premium on being treated with respect and having their expectations met by their financial institutions, according to a 2014 study from CO-OP Financial Services. 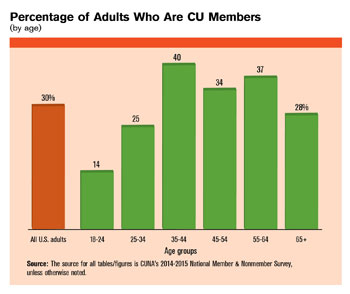 More than 80% of the young adults surveyed say their credit unions provide an “outstanding customer experience.” Only 59% of bank customers feel that way about their banks.

Young adults also tend to be strong supporters of the “buy local” movement and might be inclined to extend that to banking locally.

In the BancVue survey, 72% of Gen Yers say banking locally is at least somewhat important.

Still, that philosophical preference doesn’t automatically translate into action. In that same survey, 25% say they don’t have checking accounts at locally owned institutions because those institutions don’t offer the same benefits they receive at their current bank. And 30% say they have simply never thought about using credit unions or community banks.

It all comes back to awareness. “Credit unions must make a clear case to young adults that credit unions are their best choice, for many different reasons,” says Haller.

Meanwhile, expect a crowd of competitors to aggressively pursue young adults, including some not yet fully in the game—Google, T-Mobile, or Walmart. About 72% of Gen Yers say they’d be glad to manage their finances with these technology and retail giants if they offered full-service banking, according to a 2014 survey by Accenture.

NEXT: Opportunities with Hispanics