Consumers who took out home equity lines of credit (HELOC) shortly before the start of the Great Recession may receive a “financial shock” when they reach their “end of draw” periods in the next few years, according to a study by TransUnion.

Nearly half of all HELOC balances at the end of 2013 were originated between 2005 and 2007, and many of these credit lines had 10-year draw periods—which will come due soon.

Some 16 million U.S. consumers held roughly $474 billion in HELOC balances as of December 2013, TransUnion reports. At this time, more than 92% ($438 billion) of HELOC balances had not reached their end of draw, the point where consumers may no longer borrow funds from the line of credit and must repay the outstanding balance with fully amortized payments.

A majority of those HELOCs have balances exceeding $100,000.

“Home equity lines of credit were quite popular during the housing boom in the mid-2000s,” says Steve Chaouki, head of financial services at TransUnion. “For many people, HELOCs represented a low-interest-rate opportunity to borrow against the value of their homes, which were rapidly appreciating at the time.” 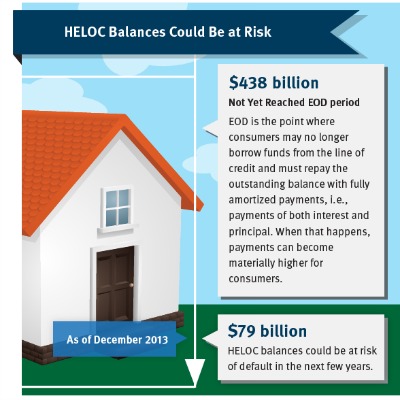 But the financial shock associated with a HELOC payment increasing to cover both principal and interest can cause liquidity issues for some borrowers, which is “driving significant concern in the lending marketplace,” Chaouki says. “Our study indicates that up to $79 billion of those HELOC balances could be at elevated risk of default in the next few years.”

Fortunately, traditional credit risk scores are effective at identifying consumers who are more likely to default on their HELOCs after reaching the end-of-draw period.

“In addition, we found that an understanding of consumer cash flows is at the heart of determining if someone can manage a larger HELOC payment each month, and how much larger that payment can grow before the consumer runs into liquidity constraints,” says Ezra Becker, TransUnion’s vice president of research and consulting.

Some consumers might have high credit scores, for example, but be unable to absorb a payment shock, Becker says.

The study findings have implications not just for HELOC portfolios, but for other loan products as well, such as credit cards, mortgages, and auto loans.

“The vast majority of the nearly 16 million consumers with a HELOC carry other forms of debt as well,” Becker says. “Our study allows lenders across portfolios to better identify, anticipate, and measure how an upcoming payment shock for a HELOC borrower might impact that borrower’s ability to repay… other debt obligations.”