Know the Signs of Workplace Fraud

Fraud by employees is more common, but executive fraud losses are more costly.

These are three top signs of employee fraud, according to the Association of Certified Fraud Examiners (ACFE). And in 92% of the cases the organization reviewed, at least one common behavioral red flag was identified before the fraud was detected.

• The higher the perpetrator’s level of authority, the greater fraud losses tend to be.

The median loss in a fraud committed by a single person was $80,000, but losses rose dramatically as the number of perpetrators increased, ACFE reports.

• Some 77% of fraud incidents were committed by individuals working in one of seven departments: accounting, operations, sales, executive/upper management, customer service, purchasing, and finance.

• The vast majority of occupational fraudsters are first-time offenders. Only 5% had been convicted of a fraud-related offense prior to committing the crimes cited in the ACFE study.

Furthermore, 82% of fraudsters had never previously been punished or terminated by an employer for fraud-related conduct.

“While background checks can be useful in screening out some bad applicants, they might not do a good job of predicting fraudulent behavior,” ACFE reports.

• Most fraudsters work for their employers for years before they begin to steal. Ongoing employee monitoring and an awareness of the risk factors and warning signs of fraud, therefore, are much more likely to identify fraud than pre-employment screening.

• Most occupational fraudsters exhibit certain behavioral traits that can be warning signs of their crimes, such as living beyond their means or having unusually close associations with vendors or customers. 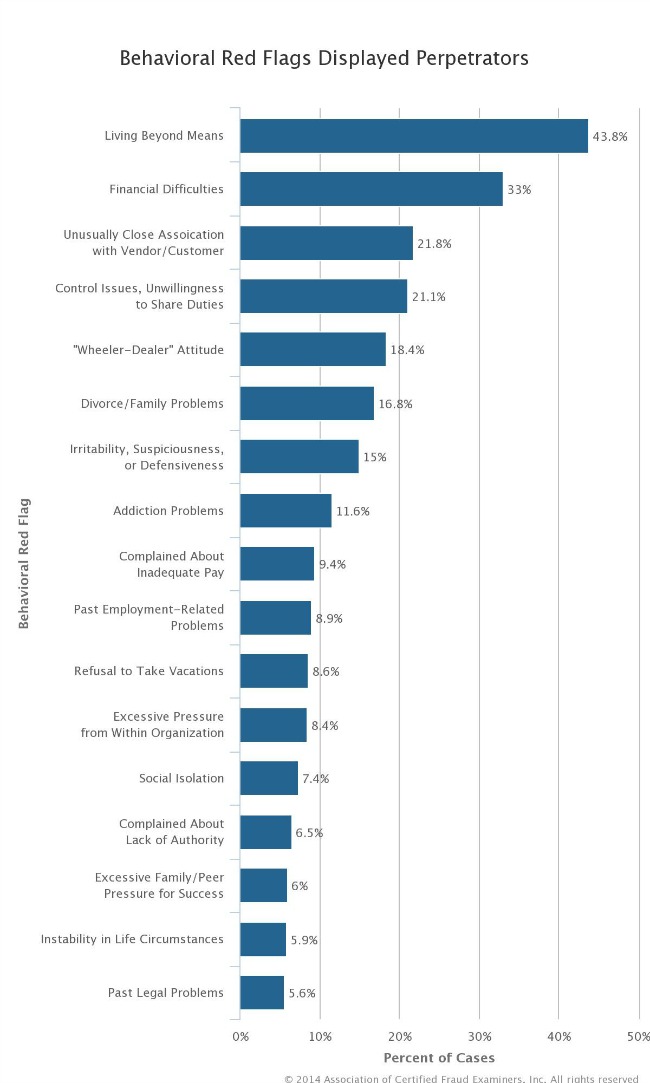