Cash is the dominant payment form for transactions of less than $10.

Instead of greenbacks, consumers use alternatives such as debit cards, prepaid gift cards, credit cards, and smartphones with electronic payments apps.

Although electronic payments numbers continue to increase, cash is not becoming irrelevant, says George Peabody, a payments strategist at research firm Glenbrook Partners. “Cash is going to be remarkably resilient. I’m not expecting cash to disappear anytime soon,” he says.

On a day-to-day basis, more than two-thirds of survey respondents carry $50 or less, 49% have $20 or less in their pockets, and 9% say they don’t carry cash at all. 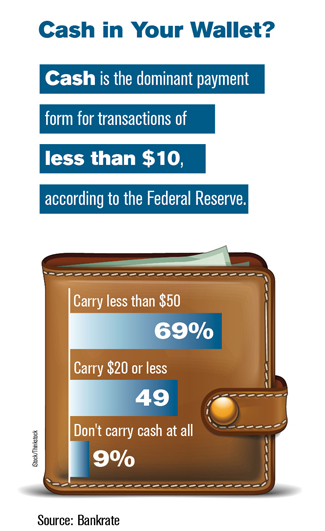 Carrying cash can have a psychological effect on spending. One university student told Bankrate that if she has cash, not only does she spend it, but she also spends more on her debit card.

“It’s a weird kind of wealth effect,” she says.

Cash is the dominant payment form for transactions of less than $10, according to the Federal Reserve. It’s most commonly used for gift s, transfers to people, food, and personal care.

But data security breaches like the one at retail giant Target make consumers wary of plastic payments.

A survey by cybersecurity firm Feedzai finds that 40% of consumers who knew about data breaches were using cash more oft en and plastic less, according to The Wall Street Journal.

“We all know that during a major event, cash is always king. You may not always be able to use cards because services could be down,” he says.