Bodell: ‘Kill Your Company’ to Save It

Author urges CUs to start an innovation revolution by identifying self-defeating practices. 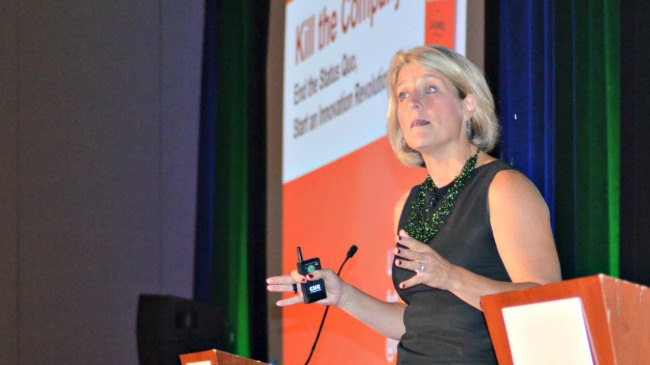 For futurist and author Lisa Bodell, a scientist’s experiment with monkeys explains a lot about what’s wrong with many modern companies.

During her keynote address Sunday at the joint CUNA Technology/Operations, Sales, and Service Council Conference in Las Vegas, the CEO of futurethink recounted the experiment in which 10 monkeys in a cage raced to a banana placed at the top.

While the winner dined, the scientist doused the losers with water, which they didn’t appreciate.

By the end of the first week, the monkeys had learned the potential reward of eating the banana wasn’t worth the cost of an unwelcome shower, so they colluded to stop each other from even trying.

Likewise, many companies choke off employees’ curiosity by fostering a culture of limitation backed by senseless rules, explicit or unwritten, Bodell says. In her dealings with major corporations, most notably in the pharmaceutical sector, she has learned that it often takes an outsider’s perspective to fix what ails your company.

That’s what led her to research and write, “Kill the Company,” a call of action to end the status quo and start an innovation revolution by identifying self-defeating practices.

In a recent survey of white-collar workers, 70% indicate they don’t regularly set aside time for creative thinking, and 66% admit to multitasking.

We value doing over thinking, process over culture, and systems over behavior, according to Bodell. “We are managing and not leading.”

Turning the tide can start with a simple exercise, Bodell suggests: Ask staff if they could kill any two rules, what would they be? Place just two restrictions on the conversation: The idea can’t be illegal or cause your credit union to fall out of compliance, and you must explain why you want the rule removed.

“The exercise yields mostly guidelines or unwritten assumptions rather than actual rules, which makes them easy to change,” Bodell says.

Then, really throw open the conversation by fulfilling the title of Bodell’s book. Ask staff to pretend they work for your No. 1 competitor, and give them 30 minutes to brainstorm how to put your company out of business. “It’s very different than normal strategic planning,” she says.

The idea isn’t to be destructive for the sake of destruction, but rather to institutionalize constant reinventing of your operation, or “practicing proactive obsolescence” in Bodell’s parlance.

Consider that Macmillan, a publishing company facing a dubious future, hired a venture capitalist and gave him more than $100 million to make controlling investments in companies designed to put Macmillan out of business, such as e-books, and educational software. If all works to plan, Macmillan will literally own the competition.

Bodell left attendees with this question: “How do you kill your company in a way that benefits you?”