This summer, CU reached the significant milestone of 100 million memberships.

And the movement has been celebrating in a variety of ways.

The monthly festival features more than 20 food trucks with offerings ranging from cheesesteaks to lobsters, as well as live music throughout the day.

CUNA volunteers, along with other credit union supporters, manned a table throughout the day, handing out “Credit unions are a smarter choice” T-shirts and slap koozies to keep beverages cold.

To submit a photo online, click on the “send us a selfie” option. View the selfies by clicking on the red menu tab on the home page and selecting “Gallery.” 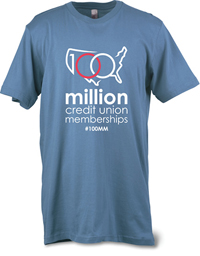 • With an average of 315 weddings per day in Las Vegas, it would take almost 870 years to reach 100 million ceremonies.

• Oregon produced $100 million worth of farmed Christmas trees last year—best in the nation.