As a member of Congress, Jim Nussle had long admired the strength of credit unions’ grassroots advocacy. And today, as CUNA’s new president/CEO, Nussle says it’s an “honor and privilege” to lead that advocacy effort.

Nussle, 54, served in the U.S. House of Representatives from 1991 to 2007, as a Republican representing Iowa’s 1st and 2nd congressional districts. As chairman of the House Budget Committee from 2001 to 2006, he oversaw the federal budget process.

The committee also monitored agencies and programs funded outside of the budgetary process. President Bush then named him as director of the Office of Management and Budget, the largest office within the executive office of the president.

He was a founding board member of Growth Energy, a trade association of renewable energy companies and industry partners, and the founder of The Nussle Group, a multidisciplinary public affairs and strategic consulting firm.

When Credit Union Magazine sat down with Nussle for this interview, he reflected on leadership, his priorities for serving credit unions and CUNA, and his views on effective advocacy.

Nussle: People who do a really great job of providing direction or the right kind of message have practiced “listen, learn, help, and lead.” Here’s what that means to me.

You have to be very good at listening not just to the people you work with but also to your customers, your members, and the public.

Learning is part of life. If you’re not learning, you might as well not be here. It’s something that I’ve always tried to do.

And then “help” is natural, or it should be. Anyone who is a leader should be a servant first because you don’t know what it’s like to be a leader unless you’re first a servant.

Leadership comes naturally if you’ve done the first three correctly. “Listen, learn, help, and lead” is just the way I approach my job and it has served me well.

CU Mag: How would you describe the state of leadership in business today?

So, no matter what you do in life, having leadership or a clearly stated goal or mission just makes good sense.

CU Mag: Did you have a leadership mentor?

Nussle: U.S. Rep. Tom Tauke from Iowa. I interned in his office in Washington and I worked on his campaign as a college student. It’s how I got into politics and public service. And in my early career— as an attorney and a district attorney—I had the opportunity to follow him in the U.S. Congress. He decided to run for the Senate and so his seat was open.

He encouraged me to run and has been there every step of the way. I can trace my steps all the way back to a conversation I had in a cafeteria at Luther College with Tom Tauke. He has been a mentor for me almost from day one—and I hope I’ve returned that favor by mentoring others.

CU Mag: What has shaped your leadership philosophy?

Nussle: Certainly it starts at home. My dad was always a very strong leader, but he didn’t do it by being hard-headed. He did it with encouragement, and he led by example.

He ran a small manufacturing shop near Chicago that made metal cabinets. My dad and my grandfather would visit the shop and talk to employees. If my dad saw a screw on the floor he’d pick it up. It showed me he was willing to worry about something that cost maybe three cents. And it taught me that if you don’t worry about the little things, you’ll never be able to take care of the big things.

I’ve also learned leadership from some pretty impressive people, too—whether it was the President of the United States, or the Speaker of the House.

CU Mag: What are your top priorities for credit unions and CUNA?

Nussle: My top priorities are CUNA’s priorities and have been for some time. No. 1 is to protect credit unions’ tax status. The credit union movement— and how we serve credit unions, partner with our leagues, and serve every member—is special. That relationship starts with our tax status. Fighting to keep that relationship and recognizing that we’re a not-for-profit entity, a cooperative, a volunteer network of people who are members themselves are most important.

No. 2 is to address credit unions’ regulatory burden. It’s just crushing, particularly when the margins are as tight as they are right now. Every ounce of capital is so important to credit unions. The regulations that came about as a result of the financial crisis and the Great Recession probably make sense for the super-giant financial institutions that were part of the problem. But now so many of our small credit unions have to comply with the same regulations.

No. 3 is to instill and continue to lead the effort to achieve a vision where Americans choose credit unions as their best financial partner. Families and small businesses want the kind of financial partner that offers trustworthiness, safety and soundness, and the ability to solve financial problems.

CU Mag: What other challenges are you hearing from credit unions?

Nussle: No matter who you are in an organization this large, you’re going to hear opportunities and real strengths, and you’re also going to hear threats and challenges. In the short time I’ve been here, I’ve heard quite a few challenges.

I’ve been listening not only to our board and our staff, but also to credit unions and leagues who’ve been involved in the movement for some time. I’ve really tried to reach out to them in the short time I’ve been in this role.

I have a lot more to do, but I’m so proud to be part of the great tradition of this organization. I’ve been on the receiving end of credit unions’ advocacy as a congressman, and I always marveled at the passion that credit union members from Iowa brought to my office. And now it’s an honor and privilege to lead that advocacy effort.

CU Mag: What has impressed you about credit unions’ advocacy efforts?

I would hope all of our advocates can do that, no matter who you are—a CEO, a volunteer, a teller, or a credit union member. Being able to tell your story, for example, about why the regulatory burden is crushing you and how it affects your relationship with the next person who walks through that door or a longstanding credit union member is important. I think any connection that people can make personally is probably the best way to connect with policy makers. Then it becomes real.

I’ve had a lot of sincere people come in my office and read talking points. But the ones who really leave the impression are the ones who tell you how you’ve made a difference or how something affects their situation negatively. That’s when your advocacy is topnotch.

CU Mag: What else do you want credit unions to know about you?

I’m a dad to two adult children, I’m a husband, I’m a guitar player, and I play in a little band in our church.

I love sports—my wife and I are crazy baseball fans. I love to golf. I think we all actually thrive in those moments when you don’t have to have a fancy title or a fancy office—that’s when we thrive.

And probably the one thing that might surprise some people is that I’ve actually grown up in the Madison, Wis., area. My folks have a small cabin on one of the lakes here and so I’ve spent quite a bit of my life in Madison—holidays, summers, and fishing trips.

For me, coming back to Madison is very natural. It’s a real joy for me. I look forward to it.

Also, I enjoy reading, and we have a dog, a Labrador Retriever named Sonny. They become part of your family. I don’t know how it happens, but it happens. Spending time with my wife, Karen, or our kids, or our dog is an important part of my life.

I’m blessed that both of my parents are healthy. My parents, sisters, and I all like to spend time together. Every summer for the past 40 years we all go to a Scandinavian family camp, where we learn more about our culture. My dad is from Denmark, first generation, and I studied there for a year.

Nussle: Life is too short, so let’s have some fun. Let’s do meaningful work, surrounded by good people. 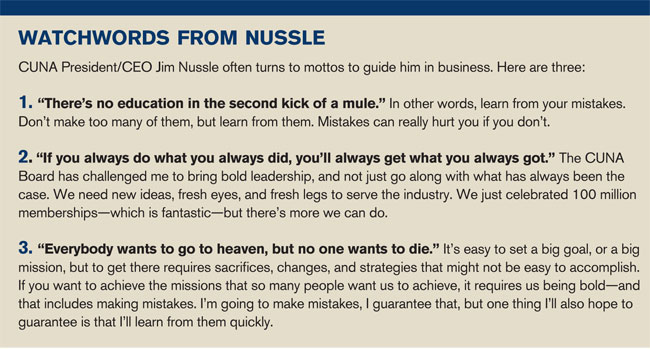