Operations VP has made her mark at First Community CU. 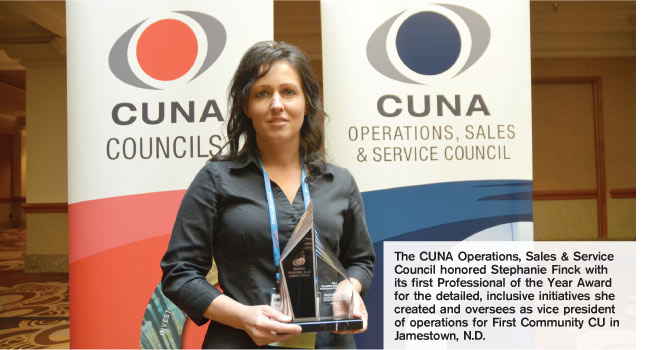 Stephanie Finck isn’t one to broadcast her accomplishments. But she has made quite a mark at First Community Credit Union in her nearly two decades at the $507 million asset credit union in Jamestown, N.D.

For her efforts, the CUNA Operations, Sales & Service Council recognized Finck with the first Professional of the Year Award at its conference in Las Vegas, in September.

“She does everything first class; she’s very detailed,” First Community CEO Stephen Schmitz says. “What she doesn’t know, she learns, and then she quickly becomes the expert at our credit union.”

Credit Union Magazine recently spoke with Finck, who started as a teller at one of the credit union’s smallest branches in 1995 and now oversees operations at 15 branches.

CU Mag: Was it difficult to move into a back-office role after helping members on the front line?

Finck: In the beginning, I thought it would be difficult to make that transition, because working with people, and becoming part of their families, was a really important piece to my position. But I’m still helping the members; I’m just doing it in a different way.

CU Mag: What does winning this award mean to you?

Finck: I’m honored to receive this award. It’s not very oft en that operations people get recognized. So this award really is for everyone at this conference. It’s a reflection of the hard work we do each and every day to make a difference— not only in our individual credit unions, but also the industry and for our membership as a whole.