Following a slowdown in job growth during August, the Bureau of Labor Statistics (BLS) revealed three “big positives” in its September jobs report, according to Mike Schenk, vice president of CUNA’s economics and statistics department.

“The August jobs report from the BLS was a bit of a disappointment,” Schenk says. “It reflected 142,000 jobs added during the month on the heels of six consecutive months of job growth above the 200,000 level. So the big question coming out of August was whether that report was an anomaly or a harbinger of bad news to come.” 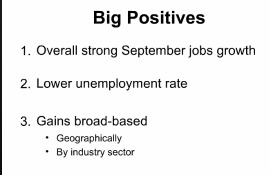 Fortunately, the September jobs report reflected strong results: 248,000 new jobs, causing the national unemployment rate to drop below 6%. “And the increases in job growth were broad-based, both geographically and by industry sector,” Schenk says.

Nearly 90% of the metropolitan statistical areas the BLS it tracks showed year over year declines in unemployment rates, he adds, and all but one industry sector (utilities) showed job gains.

“Happily, the sector that showed the greatest gain in the month was the professional and business services sector,” Schenk says. “That’s important because it’s the sector that reflects the highest pay level of all sectors the BLS tracks.”