The rapid growth of online and mobile banking is frightening for many Americans. 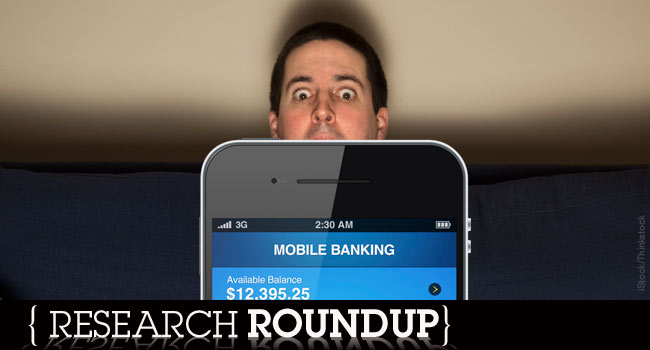 It’s Halloween time—for many, a time to “celebrate” fear.

Scary masks, ghoulish apparitions, and creepy crawlies will be a fun, fearful focus.

Fear, according to dictionary.com, is “a distressing emotion aroused by impending danger, evil, pain… whether the threat is real or imagined,” and caused by “something that causes feelings of dread or apprehension.”

Financial threats are fearful, according to PR Newswire as “Americans Share Their Biggest Financial Fears.”

“The rapid growth of online banking is creating a new concern for many Americans. Nearly seven in ten (67%) are worried about their financial information ending up in the wrong hands” as digital payments and electronic transactions become increasingly prevalent.

This week, dare to discover: who’s afraid of mobile banking? Why? Can these fears be overcome?

‘Nothing in life is to be feared. It is only to be understood.’—Marie Curie, physicist

A key takeaway for providers: “It’s going to be difficult convincing consumers to adopt mobile payments and mobile wallets as long as the financial industry continues to have security issues.”

Indeed, “Hacking Tops List of Crimes Americans Worry About Most,” agrees Gallup. Sixty-two percent of Americans worry about having their smartphone or computer hacked and information stolen.

Sixty-nine percent of those age 30 to 49 fear smartphone and computer hacking—the most of any age group—although still over half of the least-fearful age group, 65+ years old (53%), are also fearful.

Consumers aren’t the only ones shaking in their boots.

One report cited says that for third quarter 2014, “84% of financial firms ranked cyber risk as one of their top five concerns, up from 59% in the first quarter.”

No institution is totally insulated from a cyber attack, and nearly 40% of financial firms believe the “probability of a ‘high-impact event’ on the global financial system has intensified the past six months,” an increase of 16% since quarter one.

In response, 76% of firms have upped resources to find and mitigate risks.

Still, despite fearful aspects of mobile banking, some consumers forge ahead.

“Increasingly, what customers want is easy access from their phones,” notes The Washington Post, which reports,“As Customer Needs Change, Local Institutions are Banking on Technology.”

Plus, “Frequent Users of Mobile Financial Apps Feel It Gives Them a Competitive Investing Edge,” says a new Fidelity study.

“The growing momentum for mobile trading use is not only a matter of added convenience but one of added confidence, too… Sixty-nine percent of those who trade with their mobile apps say they feel it gives them an advantage over investors who do not.”

Results indicate this is true as 41% of frequent users of these apps have a return on investment in excess of 20% on their investable assets over the past year, while only 22% of users with lesser frequency of use enjoy such returns.

Fidelity investors upped their trades via mobile beyond 40%, and more than one-third made “spur of the moment” decisions with mobile devices throughout the day.

Mobile accomplishments for traders include “sophisticated investing tasks” for 56% of respondents, and more than 53% said they made their initial mobile trade in the previous 12 months. This suggests that “mobile trading may become increasingly popular.”

A recent American Bankers Association (ABA) survey says “More Consumers Embracing Mobile Banking.” It’s now the channel of preference for 10% of consumers, up from 8% in 2013.

Interestingly, another ABA survey notes “Mobile Banking Deployment Widespread. Next Challenge: Adoption.”  While “84% of banks polled during September offered some form of mobile banking,”—a number likely to grow to 93% by year-end 2015—among “banks with the best uptake, only about a third of customers downloaded their apps.”

Another third of banks cannot say whether customers have downloaded apps as their vendors do not provide this data.

Reportedly, banks have large expansion in mobile payments as upwards of 80% indicate “they offer essential functions” like bill pay via apps.

Lending may be the next area of expansion for mobile banking, the article notes. Now, only 13% of app providers permit loan applications. That number is expected to grow soon to 40%.

“Most banks surveyed intend to increase their mobile investment in the coming year” as 40% will pay for expansions like remote deposit capture. Security, too, “ranks highly among priorities” with 54% saying they will make enhancements in this area.

“To conquer fear is the beginning of wisdom,” said British philosopher Bertrand Russell.

Help members grow confidence and conquer their fear of mobile technologies with not only your attention to security details but by the valuable, convenient services you provide through these channels.

All will be the wiser for it.

LORA BRAY is an information research analyst for CUNA’s economics and statistics department. Follow her on Twitter via @Bray_Lora, and visit the CUNA blog, “The Research Roundup: Economic Perspectives.”