Innovators explain how they turn their passion and ideas into action. 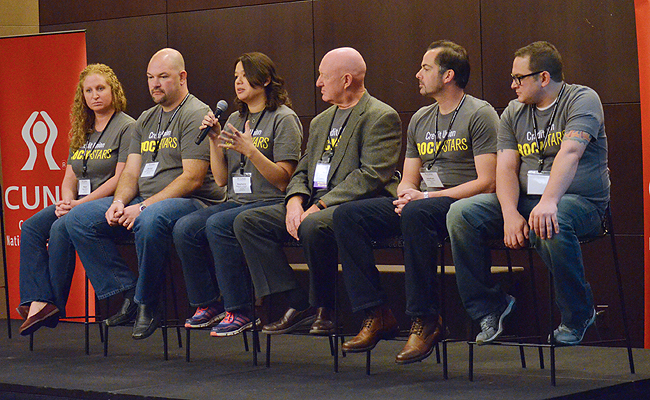 A credit union rock star is someone who demonstrates outstanding innovation and creativity in his or her chosen field, and by doing so has made the credit union movement a better, more interesting place.

The six Credit Union Rock Stars explained how they turn their passion and ideas into action to serve their members and their communities.

Rich Jones, senior vice president of sales, marketing and business development for $1.3 billion asset Eli Lilly Federal Credit Union in Indianapolis, says credit unions “are under a flow of major disruption,” citing Apple Pay as one example. “We have to pay real attention.”

He encouraged attendees to educate consumers about the difference between credit unions and other financial institutions. “Consumers don't understand our model and our value proposition.”

Because credit unions don’t have the “scale or clout” of the big banks, they’re “just another community bank” to many consumers.

“It's not about making money. Our job is to have an impact on our community,” Patrick said, adding that UT Federal has created a continuum of capital where not many in his community are willing to do it.

In Oshkosh, Wis., Bryce Roth is director of cooperative outreach at $402 million-asset CitizensFirst Credit Union and is a co-founder of Chatter Yak!! LLC, a marketing and advertising credit union service organization.

He talked about attracting millennials as members, and said in the past few years his credit union has reduced the average age of its membership by two years.

Roth described his credit union's vibrant financial education programs for 18- to 25-year-olds as a key to attracting younger members, calling it “the differentiator we have.

“As a community organization, whether they are members or not, the more financially savvy we can make our young people, the better off we all are," said Roth, joking that it does, in fact, take a lot of pizza and soda to meet that goal.

Megan Hendrix is project manager/executive assistant at Honor Credit Union, St. Joseph, Mich., and chair of the $585 million asset credit union's community fund, Powered by Hope. That fund is on track this year to donate more than $50,000 to local charitable organizations.

Hendrix summed up her advice to credit unions this way: Don't be afraid of the hard work.

Michael Jordan, vice president, branch administrator/security officer at $1.3 billion-asset Metro Credit Union, Chelsea, Mass., reminded attendees to be advocates for members. He related his efforts to get his credit union's branch offices set up with Wi-Fi because that is what members wanted.

Jordan said credit unions need to help members with what they want, which today includes consumers’ high-tech demands and expectations. “Listen to your members strategically.”

She has focused her efforts over 12 years with the credit union on the educational growth of her credit union's team members by setting up self-study programs, creating learning retention projects, and helping employees enhance their abilities.

Ludington encouraged credit unions to “keep striving to think outside of the box. Look at what you do and see if you can do it more efficiently.”