Meade will play a central role in maintaining a focus on CUNA’s goals and priorities. 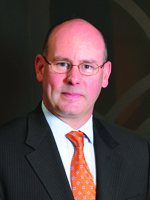 Meade, who previously served as senior aide for Nussle in the U.S. House of Representatives, was named CUNA’s chief operating officer and chief of staff.

“Rich worked for me on Capitol Hill during my entire congressional career in a number of leadership capacities, both in my personal office and at the House Budget Committee,” Nussle says. “He is a trusted adviser and longtime friend.”

Meade will play “a central, day-to-day role” in maintaining a focus on CUNA’s goals and priorities, Nussle says.

Meade, 47, worked in Nussle’s congressional office as a legislative assistant, legislative director, chief of staff, and lead policy adviser for the committees on which Nussle served, including Ways and Means, Banking and Financial Services, and Agriculture.

He also was chief of staff for the House Budget Committee, where he was the committee’s principal liaison to the House leadership, the administration, and all committees of the House of Representatives.

Prior to joining CUNA, Meade was managing director of Prime Policy Group, a public policy and government affairs firm.

He graduated from George Washington University with a bachelor’s degree in economics. He and his wife, Elizabeth, reside in Falls Church, Va., with their four children.