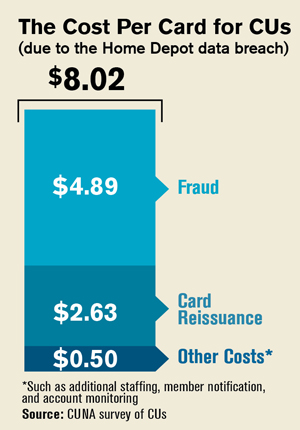 The Home Depot data breach cost credit unions nearly $60 million and affected 7.2 million cards, according to an exclusive CUNA survey. The media widely reported the results, raising awareness about the impact of these breaches on credit unions and their members.

The Home Depot breach was twice the cost of Target’s, our survey revealed. Th is adds new urgency to our call for Congress to act to stop the breaches. You can be sure we’ll press this point as members of Congress return this month to wrap up their 2014 work and begin organizing for next year.

Conducted Oct. 1 to Oct. 24, our Home Depot survey is the second to gauge the impact of data breaches. You’ll remember in January, we conducted a similar study in the wake of the December 2013 data breach at Target stores.

The Home Depot breach cost credit unions $57.4 million, affected more debit and credit cards than Target’s breach, and included a higher cost per affected card. The steep cost of $8.02 per card (which includes costs for reissuing new cards, fraud, and all other costs—such as additional staffing, member notification, and account monitoring) is indeed a heavy burden in time and expense, especially since credit unions had no role in the data violation at the giant retailer. It adds even more urgency to the need to act. Unfortunately, I hold little hope that quick congressional action is likely given the gridlock in our nation’s capital.

In late October, I received a long letter from a group of retailers listing all manner of grievances about why the breaches on their systems weren’t their responsibility.

My reply to them: We’ll back off when you take responsibility.

We’ll continue to reach out to industry partners and other groups to build more urgency about the need to address this issue. It’s unfortunate that current law and the incentive structure today allow merchants to abdicate responsibility for their data systems, making consumers vulnerable. But hopefully the additional attention we’re bringing will get more players to the table so we can find a workable solution.

CUNA and the leagues have partnered to raise visibility nationally and regionally on the critical need for merchant accountability. Our coordinated press outreach last month garnered dozens of stories in the mainstream press, cybersecurity and regional business journals, and other outlets. Several leagues secured valuable state-specific coverage of the effect the Home Depot breach had on credit unions and our members.

Our goal is to keep this conversation going with a louder and louder voice—and urge Congress to take a closer look. You can help: Visit stopthedatabreaches. com and send Congress a message that it’s time to hold the merchants accountable.

One of our key roles as your national trade association is to raise awareness about credit unions. Our most recent survey on how the Home Depot data breach impacted credit unions did exactly that—and you can expect more in the months to come.

JIM NUSSLE is president/CEO of CUNA.