‘Plus It Forward’ Creates Ripple Effect of Goodwill 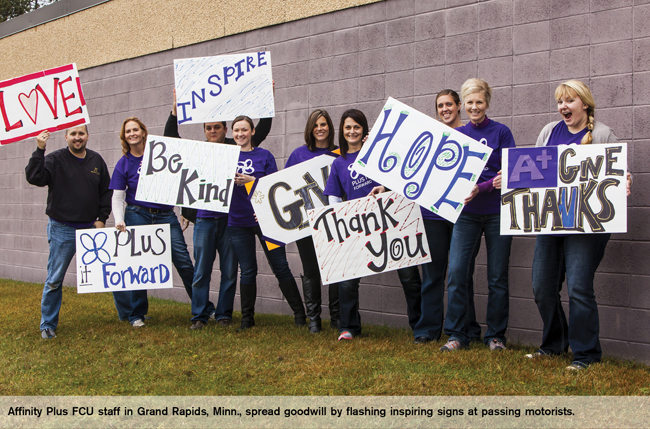 Even with its long track record of philanthropic work—which includes establishing a foundation that invests heavily in financial education, and partnering with organizations such as the American Red Cross and Children’s Hospital of Minnesota—Affinity Plus Federal Credit Union wasn’t satisfied.

“The conversation was, ‘What else can we do?’” says Kate Lee, marketing manager for the $1.7 billion asset credit union in St. Paul, Minn. “There’s not a limit to how much kindness can be spread, and we were seeing the need for people to be treated better—actions that bring more smiles. The very simple ideas.”

That concept bore the “Plus It Forward” campaign, which combines the organic energy of the “pay it forward” movement with Affinity Plus’s marketing power and geographic reach throughout Minnesota.

For more than a year now, the credit union has promoted the idea that you can make a significant difference in the lives of members and nonmembers through simple, intentional acts of kindness—and by asking those people to do the same for others.

The collective impact of those acts, apparent on the plusitforward. org microsite, embodies one of the three pillars of the Unite for Good campaign by “creating awareness” of Affinity Plus and the “people helping people” philosophy of the credit union movement.

“Credit unions exist to treat people well,” Lee says. “We want to provide a better way of banking for people, and we’re taking it a step further by spreading kindness.”

Affinity Plus recently added a twist to its campaign, handing out cards that include a QR code and identification number so participants can register their good deeds on the Plus It Forward website and track the ripple effect of their acts. The website has averaged more than 1,500 views per month this fall.

One respondent, Jan from Ham Lake, regularly delivers homemade soup to cancer patients, sick and home-bound folks, and singleparent families—a tribute to a friend who died from leukemia several years ago.

“There is something about soup that nourishes both body and soul,” Jan writes. “They love receiving it and I love making and giving it. It has become my personal ministry.”

In addition to these random acts, Affinity Plus held its second annual “Plus It Forward Day” on Oct. 13, Columbus Day. In communities across the state, credit union employees, volunteers, members, and community representatives banded together to make a difference through activities including:

• Volunteering at Habitat for Humanity and Second Harvest Heartland, delivering flowers to residents at care centers and doughnuts to members of the Grand Rapids community.

• Delivering much-needed items to the YMCA Big Brothers, Big Sisters; and hosting a blood drive in partnership with the American Red Cross in Mankato.

• Working with students to create and deliver thank-you cards to community heroes, leaving quarters on vending machines, and handing out two flowers to people—one to give, one to keep—in Winona.

“In the true cooperative spirit, Plus it Forward allows us to join together and make a difference in the lives of people who live and work in the communities we serve,” states Dave Larson, president/CEO.

“Honestly, I was nothing short of amazed when I learned that we had hundreds of people participate in Plus It Forward Day. The idea behind it is so simple, but it can become a powerful force of good, and let’s hope it does.”