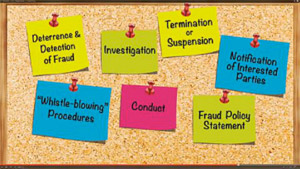 The agency released the first three episodes of its series—“Deterring, Preventing, and Detecting Employee Dishonesty”—in July.

“Frauds, even those that are relatively small, can have far-reaching repercussions affecting the reputation of the entire credit union system,” NCUA Board Chairman Debbie Matz said.

“NCUA’s newest videos provide practical tips for fighting fraud. I encourage all credit unions to take advantage of this training resource and to implement internal controls based on what they learn.”

Developed in partnership with CUNA Mutual Group and featuring staff from NCUA’s Office of Small Credit Union Initiatives, the video series provides real-world scenarios that can help managers and employees identify the warning signs of potential fraud or employee dishonesty at a credit union.

That’s important, because in 92% of cases the Association of Certified Fraud Examiners reviewed, the perpetrator exhibited at least one common red flag before someone detected the fraud.

Those oversights can be costly, because dishonest employees’ actions often aren’t discovered until upwards of $140,000 has been stolen during the course of 18 or more months, according to CUNA Mutual Group.

The first three episodes of the NCUA series provide an overview, and outline the importance of maintaining a policy on employee fraud and conducting surprise cash counts.

Another video highlights the possible behavioral red flags and warning signs of potential fraud, summarizes the main points of the video series, and provides information on additional resources.