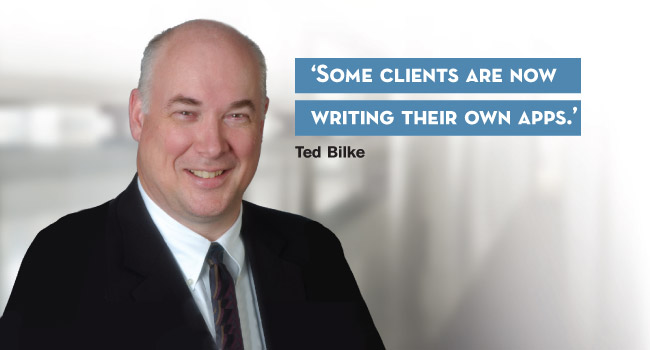 Core processors rightfully brag about the wrinkles they introduced in 2014 and what they see coming down the pike in 2015. While most of the improvements they offer are based on conscientious attempts to listen to what their clients tell them, they also have some innovations in mind that will please both credit unions and members.

“Highlights this year that will take a couple of years for our clients to fully digest include the transition to a services-oriented architecture, which saw us roll out major changes to our SymConnect offering, now called SymXchange™,” says Symitar President Ted Bilke. “We signed up 50 early adopters and two vendors to use it. Some of those clients are now writing their own apps using SymXchange to connect to our core.”

He says an “unrelenting drive to greater efficiency” led to the new SymXchange services capability. “Instead of 100 lines of code to integrate a function with our core, it may now only require two or three.”

This services-oriented architecture, Bilke adds, is the cornerstone of Symitar’s Episys system, “and positions the system for years to come.” Other innovations in Symitar’s pipeline include:

• Direct integration between Symitar’s core and products from Jack Henry & Associates, its parent company. This includes iPay, which will give users direct access to the core for bill pay funds verification;

• An enhanced check-capture solution; and

Leveraging data is another area of interest to core processors, says Mark Sievewright, Fiserv’s president of Credit Union Solutions. He says Fiserv is focusing its efforts heavily on payments and data, with the goal of enabling credit union clients to better leverage the data they already have.

Some of the company’s highlights from 2014, Sievewright says, include:

• A major focus on the integration of payments and channel solutions with its core system and third-party providers. For example, 39 Fiserv solutions have been integrated with the company’s DNA platform since 2013.

• An enhanced user experience. Fiserv’s XP2 and CUnify account processing solutions rolled out a new user interface this year that’s more intuitive. Fiserv also is making significant investments in its DataSafe user interface, which will roll out next year.

Technical efficiency is a major focus at D+H, says Tom Berdan, vice president of market development. “Credit unions should embrace cloud computing. If they’re in the cloud, they can focus more on the member instead of on hardware/ software maintenance.

“That means being able to look at members with a 360-degree view,” he continues. “How do I understand Jane Doe and what she needs or will need? Credit unions can use core and third-party data to support how they’ll deal with members.”