FULM Savings House had to prove it was different from previous financial institutions. 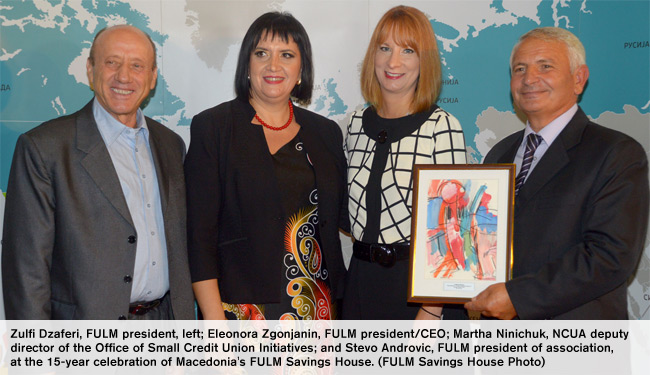 Nothing about forming a credit union in a poor agrarian country in southeastern Europe, Martha Ninichuk will tell you, is easy.

What is easy, however, is to see—in the face of a prospective membership base that doesn't trust financial institutions, a lack of modern banking technology and never-ending regulations from the government's central bank—is what the first and only credit union in Macedonia means to anyone who's been involved with its colorful 15-year history.

Fifteen years ago, working for the World Council of Credit Unions (WOCCU), Ninichuk was picked to lead a team that would deliver a credit union to a country on the Balkan Peninsula—just north of Greece and sandwiched between Albania to the west and Bulgaria to the east—that had recently seceded from the former Yugoslavia and, on its own, had been struggling to establish itself economically.

After answering a request for proposals from USAID, which would fund the project, WOCCU was granted a contract to establish a micro-savings and lending institution there.

In accepting the role, Ninichuk had committed herself to live in Macedonia for the next half-decade as the project got off the ground. The goal was for the credit union to operate on its own in only five years.

Problem One: Getting local buy-in
Once Ninichuk and her colleagues had identified locals who would become project staff to help them build the credit union, the team picked three areas where it believed the first branches of the credit union should be located.

Under the name FULM Savings House, staff went to work meeting with residents to engage them and teach them what it would mean to manage and safeguard their money at the credit union.

But there was a problem.

Only years before Ninichuk arrived in Macedonia, a massive savings house collapsed in the young nation, not only losing many Macedonians their life savings but also instilling a sense of mistrust in any type of savings house.

It took numerous meetings in each community to educate and convince residents that FULM Savings House was different from traditional savings houses—a tagline the credit union would adopt—and that it was a safe place to keep their money.

Much of that outreach was spearheaded by Albanian-born Zulfi Dzaferi, FULM Savings House president, and Stevo Androvic, FULM president of association and a Macedonian national. Both risked much to help establish the credit union.

“Zulfi and Stevo worked tirelessly with local communities to communicate the idea and concept of FULM,” Ninichuk told News Now [cuna.org/newsnow]. “It takes a particular type of courage to stand up in a very small community and support a new concept. If FULM Savings House had not been successful, Zulfi and Stevo would have been ruined personally and professionally.”

Still, it took time to build that trust.

"We would have situations where somebody would come in and deposit money, and then a couple hours later would come back and withdraw it to see if that money was still available to them," Ninichuk said. "It was just a way to test us out."

The more Macedonians worked with the credit union, the more they came to realize that FULM was in fact different than the unsound institution that had previously wronged them.

NEXT: Opening a CU where none had existed