CUs Trump Banks in Satisfaction Index 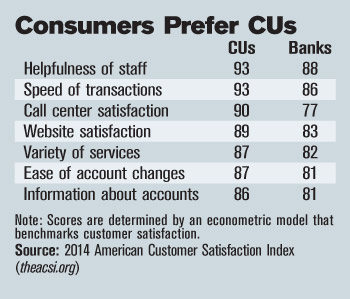 Credit unions scored an 85 to rank second among all industries on the index, which considers the quality of products and services offered by both foreign and domestic firms with significant share in U.S. markets.

“The ACSI score demonstrates how credit unions are best in class in financial services,” CUNA President/CEO Jim Nussle says. “Our not-for-profit structure allows us to serve our members rather than focus on maximizing profits for shareholders.”

The report indicates greater member loyalty at credit unions. Members are nearly 20% more likely to continue to do business at their credit unions than bank customers are at their institutions. Credit union members also believe they receive a higher quality of service for each dollar spent than do bank customers.