CUNA’s economic and CU outlooks are the rosiest they've been in years.

The 12-month increase in memberships (2.9%) is nearly four times higher than the change in U.S. population during the period (0.73%).

Improving labor markets, higher incomes, and pent-up demand led to fast credit union loan portfolio growth in the third quarter. The 3.4% quarterly increase (13.6% annualized) compares with a 3.3% increase in the second quarter and a 3.2% increase in the year-ago period.

Loans grew 10% in the year ended September 2014—roughly double the rate for banks (4.9%). Each of the seven key loan growth portfolios we track reflect healthy quarterly and year-over-year increases. New vehicle lending leads the way, reflected in a 6.2% quarterly increase and an eye-popping 19.2% increase over the past year.

Bottom-line results also improved with return on assets growing from 0.83% in the second quarter to 0.85% in the third quarter. Annualized earnings through the first three quarters totaled 0.82% on average assets, up from 0.77% in full-year 2013. That’s the second-highest reading in the past seven years.

The stronger economy is fueling these results. The Commerce Department reported annualized economic growth of 5% for the third quarter, up from 4.6% during the second quarter—and well above long-run historical averages.

It also represents the highest increase in quarterly economic output since the third quarter of 2003.

There also have been significant labor market improvements recently with robust hiring and higher wages, boosting consumer confidence and spending.

With this backdrop, CUNA’s economic and credit union outlooks are as rosy as any we’ve come up with during the past eight years. Gross domestic product growth should eclipse 3% in the fourth quarter of 2014, and is apt to advance more than 3% in 2015 as well. 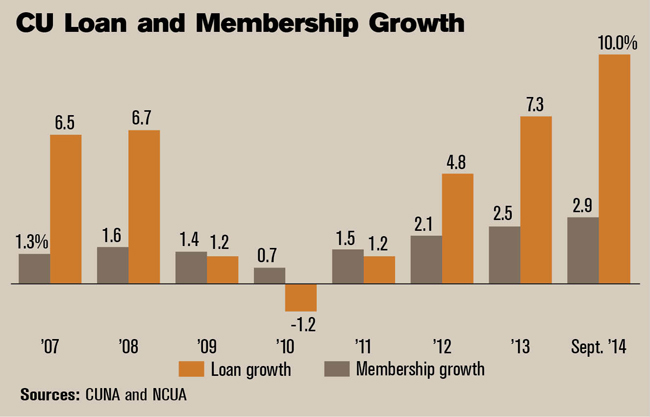 Inflation should remain in check, although trading in the Federal Funds futures market reflects an expectation of a Federal Reserve rate hike by August 2015.

Our baseline forecast calls for full-year loan growth of nearly 11% in 2014 and roughly 12% in 2015. Modest increases in market interest rates this year should combine with fast loan growth to keep credit union earnings high—and increasing.

MIKE SCHENK is vice president of CUNA’s economics and statistics department. Contact him at 608-231-4228.