Getting Ready for EMV

Converting to chip cards is one way CUs will bolster card security.

Oct. 1, 2015, will be a pivotal date for credit unions and other financial institutions, card processors, and retailers. That’s when the major card companies will implement a “liability shift ” for point-of-sale card purchases. To prepare, most credit unions with card programs are converting to the EMV (Europay, MasterCard, and Visa) chip standard.

The U.S. is one of the last countries to convert to this global standard, which originated in 1994. EMV cards have considerably curtailed fraud in card present transactions in Europe, Australia, Brazil, and Canada, among other countries, and could cut losses by 40-60% in the U.S., according to PSCU, a card services provider.

The October date means that responsibility for losses in domestic point-of-sale transactions will shift to the “least secure” entity—for example, card issuers if the merchant device is EMV-compliant and issuers’ cards aren’t. Other deadlines related to the EMV chip standard will follow.

• The card is authenticated and the cardholder is verified during EMV transactions. Those steps guard against unauthorized transactions using lost or stolen cards.

Credit unions fall into four stages of readiness in converting to the EMV standard, including:

2. Staggered migration. The $456 million asset Sun Federal Credit Union in Toledo, Ohio, and $87 million asset Georgetown (S.C.) Kraft Credit Union are among those implementing phased rollouts, either already in progress or starting early this year. Many credit unions have staggered credit and debit release depending on which poses more fraud risk for their members.

3. Strategy development. Credit unions such as $27 million asset PA HealthCare Credit Union in Sewickley, Pa., have yet to finalize EMV conversion details. They’re waiting on production timelines or pricing options from vendors, so their conversions will extend beyond the liability shift date.

4. Wait-and-see. That label applies to as many as 31% of credit unions that don’t plan to convert to EMV in the next two years, according to CUNA’s 2014 Technology Spending Survey. That’s either because the credit unions have limited fraud risk—as is the case at $13 million asset North East (Pa.) Welch Credit Union, which suffered just $85 in fraud losses in 2014—or they have limited resources. 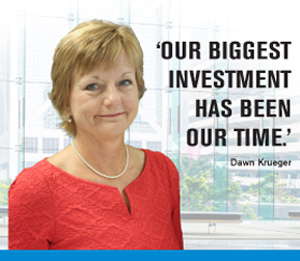 Compared with major banks, “credit unions are behind on issuing and converting cards to the EMV format,” Russell Palmer, card services manager at Spokane (Wash.) Teachers Credit Union, says in a new CUNA Operations, Sales & Service white paper. The $1.9 billion asset credit union released EMV-enabled credit cards to its international travelers, and plans to reissue all cards in that format this summer.

Less than 5% of credit unions have completed the conversion, and more than half likely will miss the liability shift deadline, according to payment processing firms. But by year-end 2015, the Aite Group estimates 70% of credit cards and 41% of debit cards issued in the U.S. by all financial services institutions will be EMV-enabled.

“It’s still early in the adoption process for the U.S., with a small but growing percentage of issuers using EMV,” says Michelle Thornton, manager of core products for CO-OP Financial Services.

The silver lining to a staggered migration? Credit unions that encounter obstacles can seek advice from those further down the road to EMV conversion, the white paper suggests.

“Other credit unions are in the same place, and others are ahead of and behind you. Reach out and learn from your peers,” says Dean Stewart, senior director of self-service product management at Diebold Inc., a CUNA Strategic Services alliance provider, in the white paper.

NEXT: The ‘Target’ effect