Member Benefits
Learn more
Learn more about the benefits of membership.
Home » Standing in the Middle of Nowhere
Management

Standing in the Middle of Nowhere

Five ways out of the regulatory wilderness. 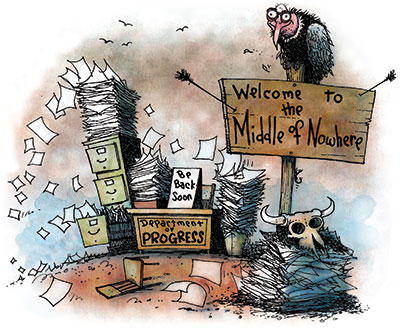 According to the Merriam-Webster Dictionary, progress is the “movement forward or toward a place.”

But according to my recollection of the past few years, we’ve only moved toward the middle of a map titled “nowhere.”

Regulators continue to implement solutions to imaginary problems. This, while Congress continues to do its best imitation of the movie “Frozen.”

But I am also an optimist—which is why I still watch the Seattle Mariners each year.

But there are big questions: Can something actually get done in this environment? What proposals exist that have the support of everyone?

Some ideas floating around the financial services industry make sense. And being sensible, it seems, means they have less chance than a ninth-grade band geek asking a cheerleader to the prom.

But here are my top five ideas:

Capital is like firewood for the winter. It’s tough to know if you have enough but easy to see if you have too little.

Capital is the fix-all, catch-all, be-all for regulators. In fact, no sentient, thinking human being with even half a working brain would argue against such a proposal— which is why our friends at the American Bankers Association hate it.

We all make mistakes. Years ago, for example, I bought the “Spice Girls” movie on VHS. How stupid was that? DVD was just rolling out!

But sometimes regulators and legislators get it wrong, too. Like when new foreign remittance rules designed to protect consumers actually made many institutions drop the product entirely.

Or when the Dodd-Frank Act required a reduction in interchange rates, assuming merchants would pass the savings on to consumers.

Maybe we just need to install a giant “control-Z” for bad ideas.

Card fraud is one of the nation’s fastest-growing crimes, second only to having my big-screen TV hijacked each week so my wife can watch “Downton Abbey.”

The real driver of this increase has been the large merchant data breaches. While some propose merchant regulation is the answer, there is an easier and less dramatic fix: Make them pay for it.

The current system is nonsensical. Merchants get hacked, apologize profusely, and wallow in their misery over champagne and caviar—all while financial institutions pay for their failure.

I once took some visiting students from Sweden to a baseball game. After discussing various essentials of the game—namely that the beer was way overpriced—my attempts at describing some rules were essentially nonsensical: “Yes, a foul ball if caught is an out unless it’s a strike, but not the third one. Now who wants to know about the infield fly rule?”

Explaining Reg D is about the same exercise. “You can only do six transfers unless you do them in person, but ATMs are okay, just not your home computer.”

Something we learned from the economic crisis: if you cannot explain it, you should not be doing it.

5. Decide on a state’s right to legalize marijuana.

Four states have legalized marijuana (Washington, D.C., has too, but it’s not a state—just like North Dakota). Another 23 have some form of medical program.

Like it or not, we’re trapped in a family squabble with dad saying no (feds) and mom saying yes (states). As an industry, we’re supposed to support our members in what they do. Either let us do that or tell them no.

Moving toward a place is a good idea. Let’s just make sure it’s not the same place we’re at.