Next president can tap into pent-up demand for bipartisanship, he says. 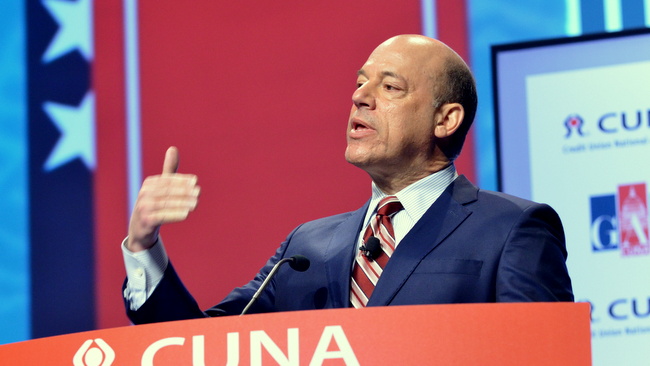 Former White House press secretary Ari Fleischer characterizes the gridlock that has consumed Capitol Hill for the past several years as an “aberration”—and believes the next president will be well-positioned to resolve the logjam.

“Regardless of who wins, I hope and expect that demand will exist for getting things done,” said Fleischer, who told attendees of Monday morning’s General Session he has been a credit union member for more than 30 years.

Fleischer calls himself a Republican convert with two liberal Democratic parents who he quipped “still are today horrified” that he served at the White House from 2001 to 2003 under President George W. Bush.

With a multitude of potential candidates for the GOP nomination in 2016, Fleischer refrained from singling out a favorite. But he believes strongly in the value of executive experience, contrasting the bipartisan accomplishments of Bush and his Democratic predecessor, Bill Clinton, with Barack Obama’s standoffs with a Republican-controlled Congress.

“The alternative wing could give her a run for the money—if only there were an alternative,” Fleischer said.

Whoever secures the GOP nomination must overcome historical trends that have helped Democrats win the popular vote in five of the past six presidential elections. Primarily, that means appealing to Hispanics and young voters, according to Fleischer, while maintaining a strong advantage among older and married voters.

“America’s demographics are changing, and Republicans have got to figure it out,” Fleischer said. “We need to have a candidate who can connect with struggling people who haven’t made it in America but who are trying.”