‘You can complete a project by dropping it.’ 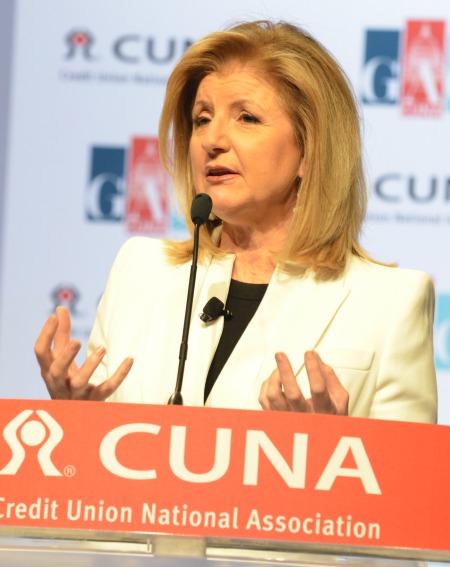 Arianna Huffington said she can remember the exact moment she began to reconsider the definition of success.

Burned-out and exhausted, she collapsed one day. “I found myself coming to in a pool of my own blood,” the founder and editor-in-chief of The Huffington Post told attendees during Tuesday’s General Session.

Huffington diagnosed Americans as perpetually stressed and sleep-deprived. “We’re living under the collective delusion that burnout is the key to success,” she said.

Throughout her conversational hour-long talk—liberally sprinkled with asides and anecdotes from her life as an international new-media mogul—she characterized the 24/7 work ethos as macho, outdated, unscientific, and, ultimately, dangerous.

Sleep deprivation, she said, undermines leadership abilities. Showing up for work dramatically sleep deprived, she said, is the equivalent to coming to work drunk.
“Clinton said the most important mistakes he made, he made when he was tired,” Huffington said. “No, he did not specify which mistakes. But we can all identify with that.”

She attributed the 2008 financial collapse, in part, to a work culture of maximum stress where employees bragged about how little sleep they got.

“That’s what happens when you’re perpetually stressed,” Huffington said. “You miss the icebergs until they hit the Titanic.”

From top athletes such as Kobe Bryant to executives like Amazon CEO Jeff Bezos, Huffington said that culture is changing.

She said leaders are embracing a lifestyle of restfulness and mindfulness, joking that in the last year more CEOs than ever have come out of the closet—as meditators.

“People are recognizing the importance of living this way, but have a really hard time doing it,” Huffington said.

Some of her recommendations included sleeping 30 minutes more each night, ending multitasking, focusing on the present, and letting go of grudges.

She said in her own life she has stopped wasting mental energy on unfinished tasks she’ll realistically never devote the time to complete, such as learning German or how to cook.

“I recognized an actually simple truth, which is that you can complete a project by dropping it,” Huffington said.