New CUNA Board Chairwoman Calls for 'Moment of Boldness' 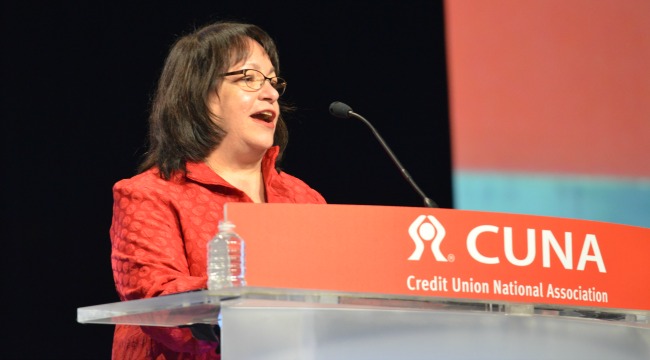 Susan Streifel, president/CEO of Woodstone CU in Federal Way, Wash., thanked her staff via telephone for their support after she officially assumed the role of CUNA Board Chairwoman Tuesday at GAC.

In her introductory address at Tuesday morning’s GAC General Session, Streifel explained how the astronaut’s bravery allowed him to become the first American to travel to outer space.

On May 5, 1961, NASA officials paused the countdown with less than three minutes left to assess a fuel pressure problem—the latest in a seven-month series of delays. Shepard interjected, “Why don’t you fix your little problem and light this candle?”

“What Shepard realized that morning is they could always find a reason to scrap the launch,” Streifel said. “The rocket was ready. The astronaut was ready. They needed a moment of boldness, and he provided it.”

Streifel will provide precisely that type of bold leadership during her one-year tenure, according to outgoing CUNA Board chair Dennis Pierce.

“Like Shepard stuck in that rocket,” Streifel said, “it’s our time to press that button and launch.”

“His experience and background in the diverse entities that we must influence to enact change is a real asset as we move forward,” she said.

Streifel inherits from Pierce the challenge of guiding the CUNA Board through potential changes in CUNA’s structure and governance. She praised credit unions who participated in surveys and focus groups that informed the committee and board.

And she highlighted three principles that will create “a future in which all Americans choose credit unions as their best financial partner”: fostering service excellence, creating awareness, and removing barriers.