Employees want communication—and that will change everything. 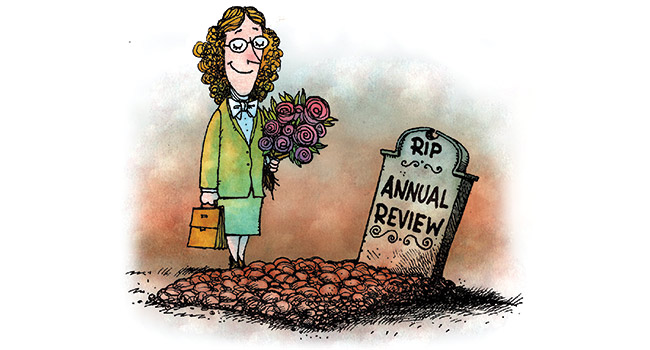 I just completed a quick Internet search of the phrase “annual employee review.” (By quick, I mean right after a few rounds of Candy Crush.) My search revealed a few provocative headlines:

It’s possible one of those might be satirical. My guess would be the Fortune article.

What’s clear is the venerable annual review seems as antiquated as using a radio and cassette recorder to mix a tape. Even my own human resource (HR) director is railing against it for these reasons:

1. It’s not relevant. As a Gen Yer once said to me, “Thank you so much for this. It’s so great that we get together every 365 days or so and discuss things that happened so far in the past that I don’t even remember! And this will be so valuable for my next 365 days, too! Oh, and I love the part about working smarter, not harder. Where do you come up with such original thoughts?”

2. Careers aren’t what they used to be. Today, many employees view their career at a company to only last a few years—or a few annual reviews. This is very different from prior generations who often wanted to be with a company until they, or it, died.

3. It’s the number. In kindergarten my teacher, Mrs. Bletch, gave me a perfect 5 on “creativity” but only a 1 on “getting along with others.” (She basically foretold my entire career.) Like school, most reviews are numeric in nature. Words don’t matter. Comments don’t matter. What only matters is the number. And that, apparently, is a problem.

4. It’s an anti-lawsuit device. If you renamed “annual reviews” as “annual legal paper trail,” I doubt many attorneys would object. When it comes to firing people, paper = defense. But dragging 95% of your staff through an exercise to help you deal with the other 5% seems a bit over-the-top.

5. Weaknesses rarely change. Someone who does poorly at math is unlikely to suddenly perform better just because his or her review says so. Strengths, too, rarely change. So what does the entire process accomplish? It ends up focusing on the negative, taking the positive for granted, and telling the employee “we judge by weakness.”

So if the annual review is deader than a Seattle Mariners baseball season, what’s next?

If we asked our employees, they’d probably tell us they want both valuable feedback and a chance to give their own ideas on their jobs. They don’t want a review—they want communication. This changes things. Going forward:

So, to close, a suggestion for the annual review’s tombstone:

“Here lies the Annual Review. We really don’t miss you at all.”