Learn From the Lending Innovators

Adjust loan products and approaches to seize on disruptors' successes.

As the payments revolution plays out, it’s clear the same advances in technology are attacking the status quo in consumer, mortgage, and commercial lending.

Credit unions can either use proprietary member data to voluntarily disrupt their own loan processes, or risk being disrupted by an existing competitor or a new, nontraditional competitor.

Credit unions will continue to rely on lending to produce earnings. But that becomes more challenging every day, with the projected losses of noninterest income from lower debit card interchange and the growing use and acceptance of Apple Pay, for example.

If you can’t build a loan-to-share ratio of 80% or more, you might put your credit union at a serious disadvantage. Can you make up for the loss of interchange through “nuisance fees?" And would that mean you risk losing one of your key credit union differentiators?

A flood of new ideas

Examples of unorthodox approaches in lending abound throughout the financial services realm.

Consider SunTrust Bank and its new lending division, LightStream. Using a different brand—seemingly to change how people look at banks and consumer lending—LightStream focuses on borrowers with prime and “super prime” credit. It offers a variety of consumer loans, from auto to home improvement.

But here’s the twist: They’re unsecured loans for borrowers with the best possible credit, carrying rates more typical of a secured loan.

Is SunTrust doing this to gain market share? Perhaps. Is it altering lending guidelines and philosophy, in conjunction with simplified processing, to maximize efficiency? Probably. Is it trying to develop a lending process that consumers can start and finish on a mobile device? Absolutely.

Meanwhile, Barclaycard Ring—a credit card offered by Barclaycard US—leverages the trends of social networking and crowdsourcing. The card has simple features and benefits and no teaser rates.

Cardholders can provide opinions and make recommendations to alter the card features. Other credit card issuers such as Citibank have developed cards eliminating late charges and over-limit fees. 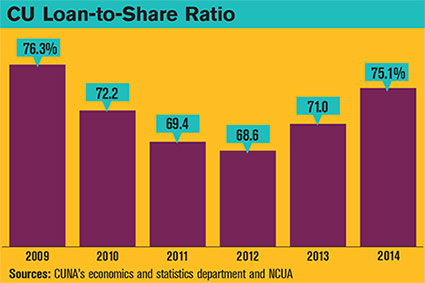 PayPal’s new business credit initiative is one example of threats from the payments market and their impact on traditional lending.

Established sellers on eBay can obtain business lines of credit with PayPal—determined by the average cash flow coming in through their accounts and repaid automatically by a certain percentage of the payments received.

The seller’s credit and income aren’t factors in the underwriting of the line of credit.

In addition, for years PayPal has offered consumer credit lines to buyers to increase sales on eBay. But now they offer consumers the ability to pay with PayPal through various online merchants and at Home Depot’s physical store locations.

And while not necessarily a player in the payments market, the mobile ride-sharing service Uber also announced in late 2014 a plan to offer new-car financing to its registered drivers.

Many Uber drivers who would like to upgrade their vehicles can’t finance new cars with traditional lenders due to credit issues.

Uber is working with General Motors and Santander Bank to provide vehicles and loans—which borrowers would repay from funds coming into their Uber accounts.

PayPal and Uber are trying to revolutionize how:

A foundation for success

How can your credit union learn from these examples and innovate in the lending space? How can you make the process more efficient, and easier for your members and potential members?

To a certain extent, credit unions already have a head start on the market, as members repay their loans better than bank customers repay bank loans, according to the FICO odds chart. With any given FICO score, credit unions can expect fewer losses than their competition on the same type of loan.

In addition, credit unions have access to members’ direct deposit and checking account histories, which might be as predictive of future loan performance as credit reports, depending on members’ credit.

Due to deep connections to their members and communities, credit unions are positioned to tailor products that meet specific needs and fit cultural norms. And generally speaking, credit unions have a competitive advantage over banks on rates and fees.

Credit unions also have a strong tradition of offering financial education classes and tools. This can improve borrowers’ understanding of the lending process and the importance of creditworthiness, and provide them a repayment framework that lessens the chance of delinquency.