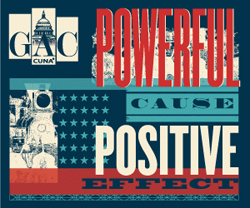 The update highlights seven bills introduced in the last week that, if enacted, will help remove barriers for credit unions to more fully serve their members.

"Their introduction, we hope, will facilitate their consideration as part of the regulatory relief process in which the Senate Banking Committee and House Financial Services Committee are engaged.

"We expect additional legislation to be introduced after the House returns from recess next week," Donovan notes in his message to CUNA members. He also underscored the importance of the advocacy work that will be accomplished by the thousands of credit union leaders who will be visiting federal lawmakers to discuss key credit unions issues as part of the GAC's advocacy outreach.

"It's going to be a great conference and an important opportunity to deliver a strong message to Congress: preserve the credit union tax status, stop merchant data breaches and remove barriers so credit unions can more fully serve their members!" the CUNA advocacy chief pens.

Donovan also encourages GAC attendees to the review congressional briefing documents that CUNA has shared and also to download the CUNA Advocacy App from the Apple App Store or Google Play.

The seven bills affecting credit unions that were introduced in the U.S. House of Representatives this week are:

The CUNA GAC runs Sunday through March 12, and the schedule is packed with exciting keynote speakers, high-level policymakers from both the legislative and regulatory arenas, information-packed breakout sessions on the credit union movements hottest topics, networking opportunities and much more.