WASHINGTON (2/13/15)--CUNA is very encouraged by comments made by several members of the Senate Banking Committee Thursday that suggest there is a strong likelihood of real regulatory reform legislation for community financial institutions. The comments came at a hearing the committee held on regulatory relief for community banks and credit unions.

CUNA's testimony was featured at the hearing, and CUNA was very well represented by its witness Wally Murray, president/CEO of Greater Nevada CU, and chairman of the Nevada Credit Union League. He told the committee that Americans cannot afford for regulatory burden to go unaddressed. 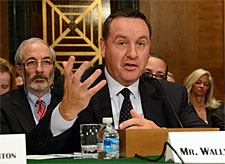 Murray spoke of the 191 regulatory changes from three dozen federal agencies introduced since Jan. 1, 2008, and asked Congress to strongly consider why small institutions are being asked to comply with rules more appropriately suited for too-big-to-fail banks and other "abusers of consumers."

"We are confident if barriers are removed, credit union members will be better off than they are today, because their credit unions will be spending less resources on complying with outdated, poorly focused and unreasonably burdensome regulations, and more on meeting the financial services needs of their members," Murray said. "We stand ready to work with you to remove these barriers."

Almost every member of the committee agreed that regulatory relief is needed. Chairman Richard Shelby (R-Ala.) several times cited the need for relief, and Sen. Heidi Heitkamp (D-N.D.) said there is "real, bipartisan interest" in regulatory relief in this Congress.

Heitkamp, Shelby and Sen. Mike Crapo (R-Idaho) each asked the witnesses to submit a list of their top priorities for regulatory relief legislation. Sen. Shelby went further, and asked the witnesses to solicit input from their member institutions with specific examples of how rules and regulations increase costs or reduce the amount of services delivered. CUNA is developing a tool for credit unions to submit this information to the committee next week.

"A lot of us are concerned when regulations limit choices, increase costs to consumers, or perhaps cause institutions to stop offering products altogether," Shelby said.

Other highlights from Murray's testimony, which included more than two-dozen suggested statutory changes, include: