WASHINGTON (3/2/15)--With CUNA's Governmental Affairs Conference (GAC) set to kick off in less than a week, two key federal policymakers have been added to a lineup that already features a number of high-profile regulatory and legislative policymakers. 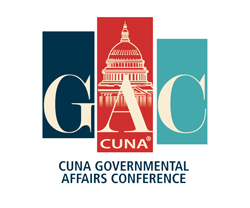 Amias Gerety, just nominated last week by President Barack Obama to the position of assistant secretary for financial institutions at the U.S. Department of the Treasury has been confirmed to speak, and CUNA also has invited Zixta Martinez, associate director for external affairs at the Consumer Financial Protection Bureau (CFPB).

"This being my first GAC, I'm proud we've put together such a power-packed agenda for the nearly 5,000 credit union leaders who will be flooding to Washington for the credit union movement's premier conference," said CUNA President/CEO Jim Nussle.

At least 10 senators and representatives are also confirmed to speak, and a number of others will make video addresses to the audience. Jason Furman, chair of the White House Council of Economic Advisors, and all three National Credit Union Administration board members will also address the credit union crowd.

In addition to the speakers and sessions, there will be an exhibit hall featuring nearly 1,000 exhibitors from more than 200 companies that provide products and services to credit unions. And credit union visits to Capitol Hill to discuss top issues with federal lawmakers and their staffs remains a central strength of the CUNA GAC.