CUNA notes that the good news is that the agency has apparently not made seeking legislation to implement the recommendations of the white paper a priority, as the paper carries a September 2013 date, and has just now been released in response to a Freedom of Information Act Request. Also,  CUNA is not aware that agency officials have pressed or even raised the issue on Capitol Hill. However, the really bad news, CUNA says, is that the agency considers these changes even remotely necessary or desirable, particularly the first one, increasing the size of the insurance fund's equity ratio. CUNA is analyzing the proposal in-depth, but says a preliminary review reveals it to be "yet another example of the agency proposing a solution with absolutely no demonstrable problem to address." 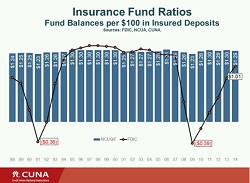 CUNA finds it particularly troubling that there are frequent references to the need to make changes similar to those recently put in place for the Federal Deposit Insurance Corp.,  which insures bank deposits. CUNA reminds that credit unions are not banks, they do not operate like banks, and the historical performance of NCUSIF compared to FDIC clearly demonstrates this.

As the accompanying chart shows, the FDIC has twice become insolvent in the past twenty-five years during financial crises.

During both of those financial crises, the NCUSIF, in its current form, performed extremely well, maintaining its equity ratio in the 1.2% to 1.3% range. This was accomplished with only modest insurance fund premiums in comparison to those charged by FDIC in the same periods. CUNA says that given this divergence in performance, why NCUA would recommend changes to make the NCUSIF more like the FDIC is "just baffling."

CUNA estimates that in order to increase NCUSIF's equity ratio from the current 1.3% to the white paper's suggested 2% in ten years would require annual insurance premiums of 8 to 9 basis points a year, or about $850 million in the first year, then rising as assets grow.

The trade group maintains that such a huge drain on credit union earnings would be totally unnecessary. The white paper bases the goal of 2% for the equity ratio on the losses generated by the five corporate credit unions that failed in the latest crisis. This analysis misses two very important points. First, insurance losses at natural person credit unions, although elevated during the crisis, were low enough to have been handled by just two NCUSIF premiums, of 10 and 12 basis points. Second, the corporates that generated the $8 billion losses described in the white paper were neither operated nor regulated and supervised as natural person credit unions. Having learned a very costly lesson, corporate credit unions now operate under a rule so restrictive that their assets have shrunk from almost $130 billion in 2006 to less than $20 billion today. The risks that were imposed by the corporates in 2006 simply no longer exist in anything close to their previous magnitude.

CUNA also has concerns with basing premiums on total assets less net worth as opposed to insured shares, since only insured shares are insured, and will be analyzing this aspect of the white paper's recommendations more closely. In principle, assessing insurance premiums on the basis of risk has merit, CUNA notes, but creating an appropriate, forward-looking, risk-based premium system would be very difficult, and probably not worth the cost given the infrequency with which premiums would need to be charged.

Again, CUNA acknowledges that it is somewhat comforting that implementing the white paper's recommendations appears to be quite low on the agency's to do list. But CUNA will stand ready to oppose major aspects of the recommendations if they are ever introduced in Congress.