WASHINGTON (5/4/15)--Credit unions around the country dealing with inaccurate attacks from the banking industry have a new resource in CUNA’s State Tax Battle toolkit. The toolkit focuses on state-based attacks from banks that have occurred in recent months.

“We want our toolkit to serve as a valuable resource to push back against bankers as they attack credit unions at not only the federal level, but at the state level,” said Richard Gose, CUNA’s chief political officer. “Banks aren’t shy about going after us, but the facts and numbers are on our side. We just want to make sure everyone has access to accurate, up-to-date information whenever it is needed.” 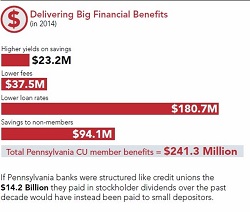 CUNA estimates that credit unions provided $7,085,207,482 in direct financial benefits to members in 2014, equivalent to $72 per member or $137 per member household. CUNA’s 2014 membership benefits report is in the toolkit, as well as a report prepared for each state.

Resources that are out there and not included in the toolkit, as well as updated resources, can be submitted to CUNA’s political affairs department.