Nussle told Metsger CUNA’s Federal Credit Union Subcommittee has been working for several months on a series of recommendations on field-of-membership rules, which the subcommittee hopes to deliver to NCUA in late May or early June.

Metsger has encouraged credit unions to be more engaged in FOM rule reforms. For instance, at CUNA's Governmental Affairs Conference in March, he said he hoped the credit union community would work to educate Congress on FOM recommendations that would require a change to the Federal Credit Union Act. Also, late last year the NCUA announced formation of an FOM working group. 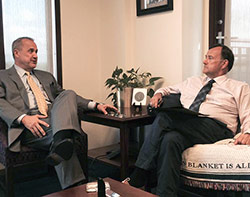 Metsger said that he appreciates CUNA’s thoughtful input and looks forward to seeing the detailed suggestions on field of membership that CUNA will be supplying.

Nussle reiterated at the Monday meeting CUNA’s view that a new interest rate risk rule is not necessary given that the agency has a relatively recent rule on the subject. Nussle and Metsger also engaged in a discussion of key concerns CUNA raised in its comment letter on the agency's revised risk-based capital plan--commonly referred to as RBC2.

CUNA strongly recommends in its letter that the NCUA withdraw its RBC2 plan but also laid out recommended changes if the board decides to proceed. The changes address areas such as the capital adequacy requirement, the definition of complex credit union, treatment of goodwill, risk weights and supplemental capital.