To stir the feel-good vibe of the credit union system’s premier summer event, themed CU in Denver and co-hosted by CUNA and the World Council of Credit Unions, CUNA supplied a pack of cards with “pay-it-forward” ideas to each attendee before the conference. On one side of each card is a pay it forward idea, such as “Pay the toll for the person behind you,” or “Pick up lunch for a busy co-worker.” On the other side is a fact about credit unions, such as “America’s credit unions are owned by more than 100 million consumer members.” 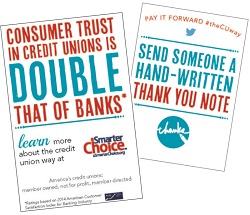 Keynoting the event will be Alan Mulally, former CEO of Ford Motor Co.; New York University (NYU), professor of innovation Luke Williams; and international strategist and leadership expert Navi Radjou, are the keynote speakers for the event, to be held.

During Mulally’s time at Ford, the company became one of the top car brands worldwide and was the only major American auto manufacturer to avoid the government’s industry bailout. Mulally currently serves on the Google board of directors to assist with the development of driverless cars.

Williams, professor of innovation and executive director of the Berkley Entrepreneurship Center at the NYU Stern School of Business, specializes in entrepreneurship, cultural change and disruptive innovation. He authored the best-selling book “Disrupt: Think the Unthinkable to Spark Transformation in Your Business.”

Radjou, an Indian-born French national, is a fellow at Cambridge Judge Business School and the executive director of the school’s Centre for India & Global Business. In his book, “Frugal Innovation: How To Do More With Less,” Radjou discusses how businesses with limited resources, like credit unions, can use innovation to provide their members with high-value products and services without added costs.

Breakout session topics during the event include:

The event will also include participation from the global credit union community’s Gen Y contingent. Paul Smith, bestselling author of “Lead With a Story: A Guide to Crafting Business Narratives that Captivate, Convince, and Inspire,” will address the World Council Young Credit Union People (WYCUP) program, a globally focused working group for credit union professionals under the age of 35. WYCUP will also hold the initial meeting of its alumni group. The WYCUP program will be supported on social media with the hashtag #WYCUP.

The Cooperative Trust will sponsor Crash Denver, through which 10 young credit union employees attend conferences sessions and use their knowledge to help build a new credit union business model aimed at the next generation of consumers. The Crash program was developed by the Cooperative Trust, a grassroots group of young people under 35 working in credit unions and cooperatives.

Also during the conference, Mike’s 2 Kitchen, a local food truck, will distribute 1,000 tacos to promote America’s credit unions to the general public. The giveaway, sponsored by CUNA and aSmarterChoice.org, will take place at Civic Center EATs, a venue that brings together gourmet local food trucks to downtown Denver’s Civic Center Park. Napkins and signage will re-direct customers to aSmarterChoice.org, a joint project of CUNA and the American Association of Credit Union Leagues. aSmarterChoice.org, which can be followed on Twitter with the handle @aSmarterChoice, is aimed at helping create consumer awareness of credit unions and building membership. The event will be highlighted on Twitter with the hashtag #TheCUWay.