More than 100 board members, chief financial officers and CEOs were on hand for presentations from Bill Hampel, chief policy officer; Mike Schenk, vice president of economics and statistics; and Perc Pineda, senior economist, reported CU Weekly, a publication by the California and Nevada Credit Union Leagues. 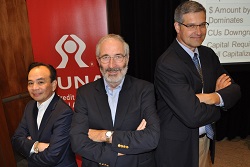 “There will be significant changes in credit union members’ behavior when the Fed makes its move,” said Schenk. “Historically, net interest margins and bottom line results decline. And usually there are outflows from savings accounts, which may present liquidity issues.”

Schenk, Hampel and Pineda took to the stage in a “for” and “against” discussion of the expected rate hike.

“The question is ‘how fast’ the Fed will do so over the next several years,” said Pineda (CU Weekly). “Our message is: It could happen both ways, either aggressively or at a more moderate pace. No one really knows. Credit unions can prepare for either scenario.”

Schenk said overall credit unions can weather this challenge, but they’ll need to be aware of the economy’s cues and broader conversations.

Hampel said he expects interest rates to rise 100-150 basis points during the next 18 months to two years. “Rate increases should be much more moderate than the Fed’s action in 2004,” he said.

Credit unions’ core deposits, which are rate-sensitive, are to be monitored, he added. “A lot of core deposits will leave your credit union and chase higher rates in the market,” Hampel said. “We think there’s more concern regarding a liquidity issue than anything else.”

He also reminded credit union leaders to act in the best interest of their members, CU Weekly reported. “If rate risk doesn’t affect your credit union, you might not be taking enough risk on your balance sheet for the sake of your members,” Hampel said.

Additional data from the conference, including 2015-2016 industry predictions:

The team also noted that the mortgage market will experience refinance “boomlets” as it slowly transitions into a long-term purchase pattern.

Annual auto sales will stay above 16 million for several years because of a backlog in demand from 2008 to 2012.