A thorough program for new hires can improve engagement and retention.

“We were the typical shop,” says Lori Horstman, vice president of member experience for the $1 billion asset credit union, explaining that new employees would sit with human resources (HR) for a day and a half before being sent on to learn their jobs.

But Horstman, who oversees the credit union’s training and learning operation, recognized this process wasn’t getting the job done.

Altra wanted to be an employer of choice in its area, which was becoming a job-seeker’s market as the economy bounced back from the recession.

And as a quickly growing credit union with 16 branches in nine states, it sought greater employee understanding of the credit union movement’s philosophy, greater engagement with the organization’s values and processes, and better cross-departmental staff interaction.

“We trained our staff well, but there always seemed to be that missing link,” Horstman says.

So Horstman’s ears perked up while attending the CUNA Experience Learning Live! event where a lot of conversations revolved around employee onboarding. This inspired her to develop a program that emphasizes the credit union’s investment in employees’ personal advancement.

Has turnover increased at your CU due to the improving economy?

Hallmarks of the program include:

This provides a framework for success not just for employees’ first week on the job but throughout the course of their first year, she maintains.

Although many credit unions have embraced innovative employee onboarding programs such as Altra’s, “for the most part, credit unions miss the mark” because they don’t commit enough time, energy, and staff resources to this process, says Carolyn White, training manager at $647 million asset SESLOC Federal Credit Union in San Luis Obispo, Calif.

And many organizations might believe they have an onboarding process, but what they actually provide is employee orientation, adds Beverly Purtell, credit union human resources consultant. They’re focusing more on processes and training employees to complete tasks rather than introducing them to the culture and encouraging them to build relationships in the organization.

That approach “can cause higher turnover, which winds up being costly,” Purtell points out.

Reliable calculations place the cost of replacing an hourly employee at between 30% and 50% of the person’s annual salary—and potentially as much as 100% for an executive. And that doesn’t count indirect fallout such as loss of institutional knowledge and continuity, as well as decreased morale, say White and Purtell.

Harnessing turnover is critical because of the greater opportunities presented by an improving economy. According to Jobvite’s 2015 Job Seeker Nation Study, 60% of job-seekers are equally or more optimistic about their chances of landing a new position than they were a year ago. And even among employees who are satisfied with their jobs, 45% are open to taking a new one elsewhere.

Credit unions replaced just 13% of employees in 2014, according to CUNA’s 2015-2016 Turnover and Staffing Report. That figure has risen gradually since 2009, when turnover stood at just 9%.

“We’ve noticed higher than normal turnover in our industry, and not just on the front line,” White says.

A credit union can substantially aid its bottom line by improving talent evaluation and integration practices. At Altra, for instance, engagement rose 3% over last year. “To me, that’s a direct result of onboarding,” Horstman says.

A process, not an event

Proper onboarding starts before you’ve even hired someone, say White and Purtell. They advise credit unions to carefully craft their brand in the digital channels job seekers peruse.

That includes your credit union’s website, which should broadcast the story of the credit union movement and your organization’s role as a champion of your members and your community.

“Providing a better understanding of your credit union will attract and energize candidates,” White says.

SIDEBAR Increase the Effectiveness of Your Member Onboarding Program

After hiring a candidate, FivePoint mails a welcome packet that explains where to report on their first day and what materials to bring. A letter from the CEO welcomes the new hire to the team, and the credit union mails a separate card signed by each member of the human resources department and leadership team.

In advance, new employees fill out and return a “Getting to Know You” document listing personal facts such as favorite candy, favorite shops, and proudest accomplishments. Their supervisor and coworkers have access to the document, providing some starting points for conversation.

FivePoint, which augments its in-house training by enrolling staff in CUNA Professional Development Online courses, interviews new employees after six months to assess and address strengths and shortcomings of its program.

“Employees see the company investing in them, which in turn creates engagement and loyalty that might take years to develop, or is otherwise nonexistent,” FivePoint’s White says.

NEXT: The Cornerstone Academy

Altra relies on many arms of its credit union to welcome and educate new hires. The process starts with its Cornerstone Academy program, held every two weeks from Monday through Thursday. 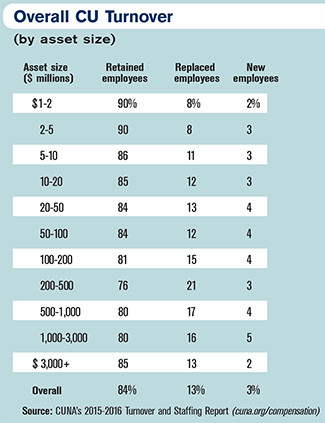 What Horstman often hears from new employees afterward is, “I can’t believe they took hours out of their day to come and talk to me.”

For 90 minutes on day one, a member of the senior management team delivers a presentation covering subjects such as Altra’s history, service standards, and belief in the importance of financial literacy.

Then a management team member takes the group out to lunch and explains the importance of each employee’s role in the context of the organization’s success.

During the final two days, experts from each department offer an overview of Altra’s products and services—partly to educate, and partly to encourage the new employees to become active, loyal members.

They also learn about service strategies through CUNA’s Creating Member Loyalty™ program, and attend lunch with their direct manager.

Initially, experienced staff struggled to understand why they should participate in the onboarding process, Horstman says. But she told them that new employees want to hear from the subject matter experts who show passion for their jobs, and have a deep understanding of the day-to-day requirements of their positions.

The onboarding process continues through peer mentors who guide the new employees. And the learning and development department conducts face-to-face assessments at three and six months.

New employees face one requirement: They must come armed with a question for Peplinski about Altra.

“He really has a great dialogue with them,” says Horstman, who facilitates the lunch meetings.

The Cornerstone Academy’s immersive nature works particularly well for Altra because its workforce is so spread out. That’s a legacy of its founding as Trane Employees Federal Credit Union, serving workers at the heating and air conditioning manufacturer.

The training creates a consistent approach between the roughly 60 employees dispersed nationally and those who work at the credit union’s headquarters or nearby in the Mississippi River valley of Wisconsin and Minnesota. Altra also uses video conferencing to train employees at remote locations.

New employees notice they’re receiving attention from the top to the bottom of the organization, Horstman says. “They learn this isn’t just a job—it’s a family, and we care about each other.”

To develop or expand an onboarding program requires commitment, but it doesn’t need to cost much money or take a lot of time, SESLOC Federal’s White says.

“It just takes planning,” Purtell notes. “You need to figure out what you’re willing to do and who can do it, and put a process in place.”

HR specialists refer to the five Cs of onboarding:

None of those items come with a sizable price tag, SESLOC Federal’s White says.

The biggest challenge, especially for small credit unions, is time: finding time to create and implement a plan, and allowing time for the new employee to learn about the big picture before tackling job-specific training.

Both sacrifices will pay dividends down the road, according to Purtell.

“Small credit unions can invest small resources for a huge payback,” she says.

Prioritize the elements of the program you want to create, and introduce them sequentially, Horstman advises. “When you can say, ‘Hey, we did this!’ you have more validity and credibility to pursue additional ideas.”