MANCHESTER, N.H. (9/23/15)--A box of archive materials from CUNA’s 1970s and 1980s National Advertising Program to increase national interest in and awareness of credit unions has been donated to the America’s CU Museum in Manchester, N.H.

The historical materials were donated by Vicki Thomas of Weston, Conn., the former head of CUNA’s National Advertising program at the time, according to museum Executive Director Stephanie Smith, who said the materials will be included in the new CUNA Research Center. 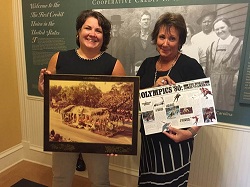 Its tagline, “Join Your Credit Union--It’s Where You Belong,” was adopted not only by U.S. credit unions but also those in Canada and Australia. The campaign raised more than $857,666 with voluntary contributions using a formula of $50 per $1 million in assets. Leagues from Delaware, Illinois, Iowa, Maine, Nebraska, New Jersey, North Dakota, Ohio, Oregon, South Dakota, Virginia and Wisconsin donated 100% of their share and CUNA Mutual Group donated $200,000 to the campaign.

The campaign brought these national highlights for credit unions:

Thomas left CUNA in 1983 to join the ABC network in Chicago and then New York.