Minority depository institution (MDI) credit unions play a critical role in advancing financial inclusion and the economic well-being of people of color, and underserved and low-income communities. They form an integral part of the credit union movement and represent an important way in which credit unions fulfill their mission.

The tradition of credit unions serving a specific minority group goes back to the African-American credit unions of the early 20th Century, established to provide financial access to communities which had been excluded from the mainstream financial system.

The typical black and Hispanic/Latinx household in the U.S. is more likely to experience wealth and income disparities than white and Asian households, according to data from the Census Bureau and Federal Reserve.

These disparities increase the likelihood of their financial exclusion.

In this context, millions of people of color choose MDIs. By definition, more than 50% of MDI credit union boards and member-owners or potential members must come from a specific minority group.

Further, MDIs are more likely to have branches and lend more in diverse neighborhoods, which often lack access to the capital needed to prosper and build wealth.

Most MDI credit unions (87%) are small institutions with assets of $100 million or less and hold the low-income designation (80%). They are well-capitalized as a group, with 95.1% reporting a net worth ratio of at least 7%. 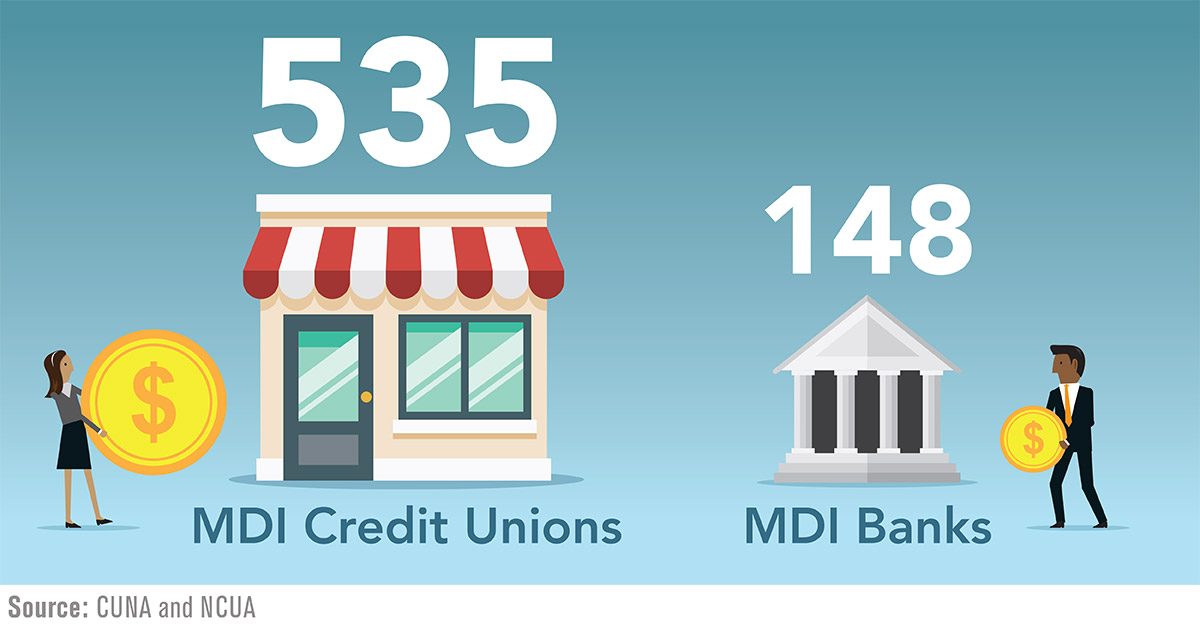 CUNA estimates that during the 12 months ending March 30, 2019, MDI credit unions provided approximately $324 million in direct financial benefits to their members (equivalent to $85 per member or $179 per household) due to lower rates on loans, lower and fewer fees, and higher rates on deposits compared with banks.

While substantial, these figures underestimate the benefits MDI credit unions provide to their members and communities because they don’t consider the benefits of tailored products and services they offer. These include financial education and counseling, small-dollar loans for borrowers with poor or no credit as alternatives to payday loans, and bilingual services.

MDI credit unions clearly are vital actors in the credit union movement, especially when it comes to advancing financial inclusion and security for people of color, and traditionally underserved and low-income members and their communities.