The future of branches

Despite the increased adoption of digital banking services due to the pandemic, consumers continue to value physical branches.

The coronavirus (COVID-19) pandemic has accelerated the adoption of digital banking technologies, leading many to question the need for extensive branch networks. In fact, 2020 witnessed a record number of net bank branch closings, not including branches temporarily closed due to the pandemic.

What might the future post-pandemic branch look like? How can it best cater to the needs of a more technologically savvy population while continuing to serve those who prefer personal relationships?

The decline in branch networks

First, it is important to acknowledge that the number of bank branches has been steadily declining since the 2007-2009 financial crisis. Bank branches (including headquarters) peaked at nearly 100,000 in 2009 before falling to 79,974 by year-end 2020.

Unfortunately, even before the pandemic, this trend has led to the creation of hundreds of “banking deserts” across the country, or regions with inadequate or no mainstream financial services.

Rural, diverse, and low-income communities are particularly vulnerable to branch closures, and there is growing concern that branch closures in disadvantaged communities may exacerbate existing inequalities in access to affordable financial services.

Credit unions also have different location patterns relative to commercial banks, with a higher proportion of branches in low-income and ethnically diverse counties helping to prevent many banking deserts. Still, credit unions face similar pressures as banks due to the pandemic, such as reduced foot traffic and an increasing share of members adopting mobile technologies.

Estimates range that branches have experienced 40% to 50% less traffic since the pandemic started, although some of that has returned in recent months as new COVID-19 cases have ebbed in most states. The extent to which customers will return to physical branches after they’re vaccinated and the pandemic subsides remains unclear.

On one hand, people may yearn for the personal aspect of chatting with a teller or loan officer. On the other hand, as more people adopt mobile technologies for everyday transactions such as bill payments and check deposits, it seems unlikely that they will visit branches at the same rate as before the pandemic.

Banks have bet that branch visits will remain muted even after the pandemic: banks and thrifts closed 3,324 branches in 2020 (versus opening only 1,040), leading to a record net loss in bank branches of almost 2,300. U.S. Bank, for example, announced it will close 400 branches, or 15% of its total locations. Wells Fargo, which has the nation’s largest branch footprint, announced plans to reduce the number of its branches from 5,400 to 4,000.

NEXT: The importance of branches

The importance of branches

Even before the COVID-19 pandemic, consumers were increasingly turning toward digital banking options, including ATMs, online banking, and mobile banking. Data from the 2017 Federal Deposit Insurance Corp. (FDIC) “National Survey of Unbanked and Underbanked Households” shows that 63.0% of respondents used online banking to access their accounts in the last 12 months, up from 55.1% in 2013, and 40.4% used mobile banking in the past 12 months, up from 23.2% in 2013.

This is comparable to data from the 2017 Federal Reserve Board’s “Survey of Household Economics and Decision-making (SHED),” which estimates that about half of U.S. adults with bank accounts had used a mobile phone to access a bank account in the last year. 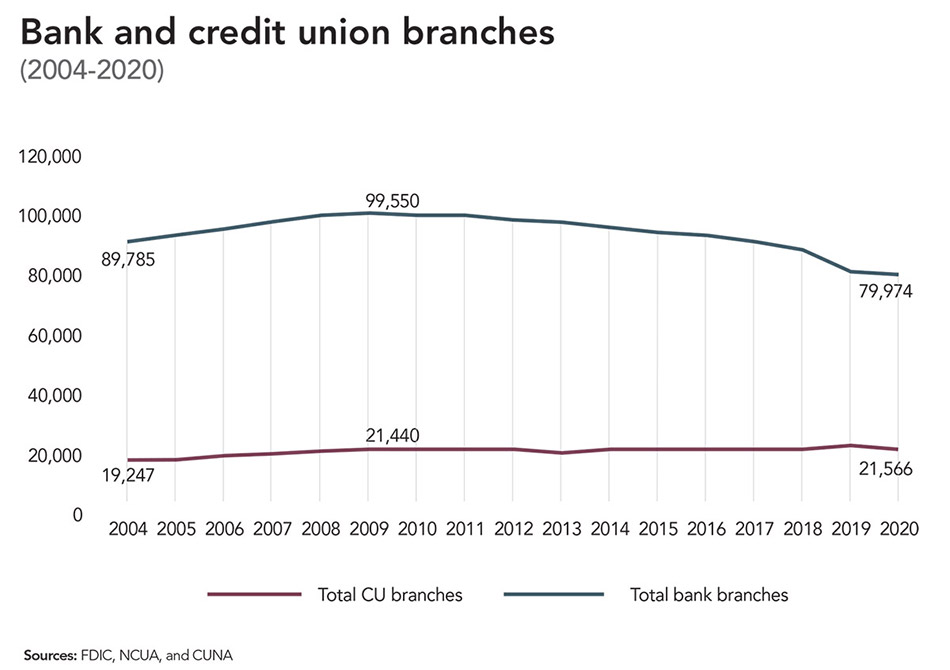 Moreover, 96% of larger banks and credit unions with more than $1 billion in assets (who serve the vast majority of U.S. households) offered mobile banking services.

These populations may find it more challenging to access broadband internet, invest in technologies that enable mobile and online banking, and learn new digital banking methods.

For example, in the most recent SHED survey (2019), rural residents were less likely to say they have broadband internet and to have a data plan for a smartphone. Small businesses, seniors, and those lacking consistent and reliable transportation reported being most negatively affected by branch closures.

A 2019 report by the Federal Reserve Board of Governors finds that branches continue to be an important banking channel for consumers—especially for deposit and withdrawal transactions, accessing safety deposit boxes, and for resolving problems—as well as small businesses.

‘While fewer members may enter our doors on any given day, those who do may be the people who most need our help and support.’

Most small businesses prefer to use local banks to access financial services and seem to garner tangible benefits in terms of credit availability and preferable terms. A majority of mortgage borrowers also indicate that the presence of a local branch and an existing relationship with a financial institution are important when selecting a mortgage lender.

Rigorous academic research highlights the continued importance of the branch. “Relationship lending,” in which lenders use “soft information” about borrowers through repeated interactions over time, can enable lenders to make better underwriting decisions.

Various studies demonstrate that loan applicants who are relatively close to their lenders are more likely to be approved for loans and less likely to default.

Proximity and soft information are particularly important for low-income populations. Credit scores and other underwriting techniques based on hard information are likely to be less effective in low-income markets because the quality of the information is lower and the average risk of the potential loan applicant is higher.

One study finds that for low-income borrowers, mortgage originations increase and interest spreads decline when there is a bank branch located in a low- to moderate-income neighborhood.

Branches are also shown to be incredibly important for small business lending, and increased distance between small businesses and branches leads to fewer small business loans and slower economic growth. These findings may, at least in part, explain why surveys and interviews by the Federal Reserve show that small businesses have a strong preference for using branches to access financial services.

NEXT: What's next for branches?

What's next for branches?

The pandemic and the subsequent rapid transition to digital banking affects not only the number of branches but how customers use them. As credit union members get used to performing routine transactions online or via mobile phones, they become less likely to visit branches.

Those visits are typically for more complex transactions and questions, including loan applications, complaints, financial planning, or trusted financial advice.

This trend has led some to refer to future branch visits as more akin to a doctor’s visit—something you do perhaps once or twice a year and typically for emergencies, complicated questions, or annual check-ups.

For credit unions—who stand out for member service, personal relationships, and financial education—the question of how to use branches in the future is particularly salient and presents both an opportunity and a challenge. Credit unions should resist the urge to simply follow the trend of closing branches to cut costs, even if foot traffic has fallen significantly.

While fewer members may enter our doors on any given day, those who do may be the people who most need our help and support. We could redesign branches to better cater to personal relationships and longer conversations, such as by having more open floor plans, quality coffee and snacks, waiting areas for children, or free Wi-Fi.

Drive-thru services could cater to both quick transactions and longer queries, such as by having designated lanes for quick deposits/withdrawals and those for longer loan applications or financial advice (with the lane requiring the most member interaction closest to the teller window). 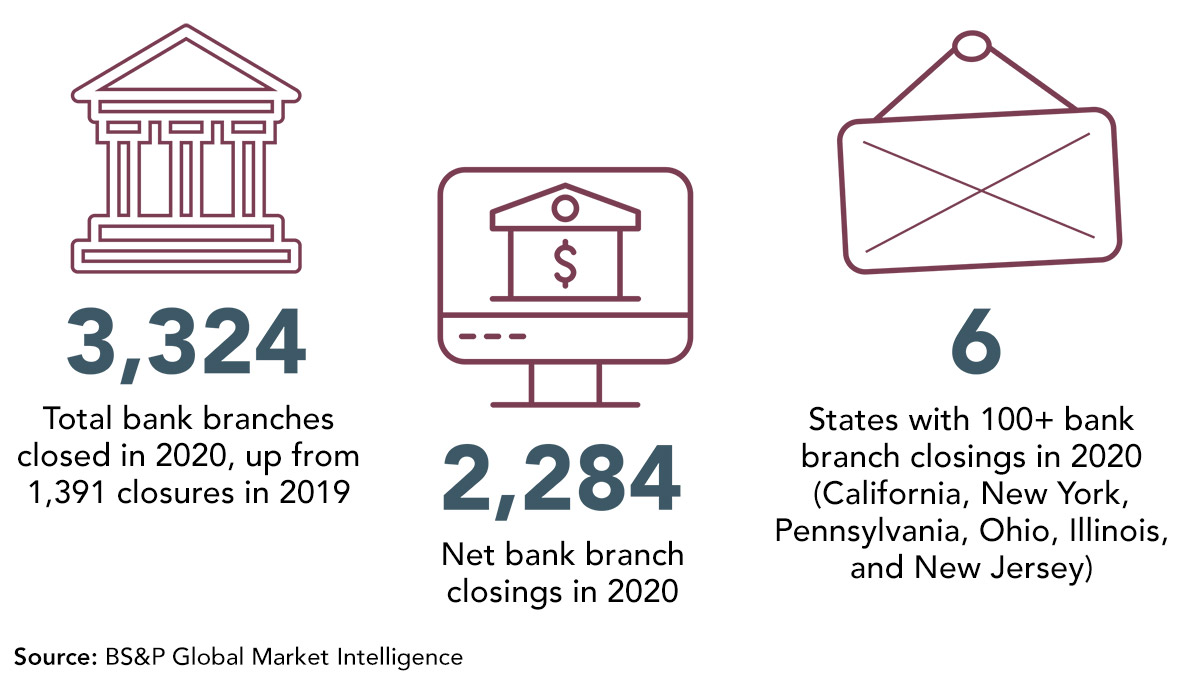 Many credit unions have already deployed video kiosks, including in smaller “mini branches,” that allow a conversation and face-to-face interaction with a person without having to be in the same location.

Even before the pandemic, financial institutions experimented with designing branches to be more like cafés or coffee houses. For example, Capital One Cafés offer coffee, food, free Wi-Fi, fee-free ATMs, and iPads that invite customers to take short financial lessons or quizzes to test their money knowledge.

They also include dedicated spaces where people can sit down with financial experts (“Café coaches”) and a touchscreen for money coaching sessions. Credit unions could implement similar ideas that promote personal relationships as well as financial education and financial literacy classes and workshops—high-touch activities that are more difficult to promote via digital channels.

With these changes, credit unions will also need to consider the qualities, attitudes, and skills their frontline employees should possess when making hiring decisions and training staff. For example, floor staff will need to be friendly, welcoming, and empathetic, but also knowledgeable and skillful enough to quickly resolve complaints and solve challenging questions.

Nothing is more frustrating for a member than driving all the way to a branch to speak to someone in person and then not have their problem resolved. And many of these members might have already tried resolving their problem online or by phone without success, and could be particularly irritated.

Members want to feel they can trust their financial provider to listen to them, empathize, have their best interests at heart, and resolve their problems. This is typically best achieved in face-to-face interactions when you can look into the eyes of the person on the other side of the transaction.

Fortunately, credit unions are already rising to the challenges of the pandemic and changing consumer behavior.

CUNA surveys show that around 80% of credit unions have created new loans to meet members’ pressing needs during the pandemic, nearly 95% have offered loan modifications, more than 90% have waived fees, 62% have enhanced drive-thru transactions, 63% offer flexible work schedules for employees, and about half of credit unions have enhanced their mobile app capabilities.

No doubt credit unions will continue to innovate with their branches, too, mindful of both changing consumer preferences and technology adoption, as well the needs of our most vulnerable members and our comparative advantage in member service and relationship banking.

JORDAN VAN RIJN is senior economist for Credit Union National Association. Contact him at 608-231-4286 or at jvanrijn@cuna.coop.

This article appeared in the Summer 2021 issue of Credit Union Magazine. Subscribe here.