The National Credit Union Share Insurance Fund (NCUSIF) equity ratio (which consists of the fund’s retained earnings plus credit unions’ 1% deposits divided by total insured shares) is the overall capitalization of the insurance fund to protect against unexpected losses from credit union failures.

The policy for setting the NOL, adopted in 2017, established a periodic review of the NCUSIF’s equity needs. At least annually, NCUA staff reviews the level at which the NOL is set and reports this information to the board.

Board action is only necessary when it determines a change in the NOL is warranted. The policy establishes that any change to the NOL of more than one basis point shall be made only after a public announcement of the proposed adjustment and opportunity for comment.

In 2017, the NCUA Board increased the NOL to 1.39% because it merged the Temporary Corporate Credit Union Stabilization Fund (TCCUSF) into the NCUSIF. Prior to this, the fund’s NOL had been at 1.30% since 1984, including during the Great Recession, which the board determined did not necessitate an increase.

The increase was necessary to ensure an adequate buffer in the event those valuations declined substantially.

Another reason the board increased the NOL in 2017 was to ensure it could withstand a modest economic downturn based on modeling using Federal Reserve economic forecasts.

The NCUSIF did suffer a substantial loss during the Great Recession in the wake of the housing crisis. However, that loss did not stem from natural person credit unions.

Instead, it arose from the conservatorship of four large corporate credit unions, each with extremely high concentrations of private label mortgage-backed securities in their portfolios.

Since then, the corporate system has been modified so much as to be almost unrecognizable compared to a decade ago. That change was for the most part driven by the NCUA’s reaction to the crisis.

Before the housing/financial crisis at the end of 2006, there were 30 corporate credit unions with total assets of $129 billion and total shares of $98 billion.

Those shares amounted to 18% of the insured shares in all credit unions and the NCUSIF equity was equal to only 7% of total corporate shares. The aggregate capital ratio of the 30 corporates was 2.8%.

As a result, today there are 11 corporates will total assets of just $38 billion and total shares of $35 billion. Those shares now represent just 2% of insured shares in all credit unions.

NCUSIF equity compared to total corporate shares is now more than seven times greater than it was in 2006. The aggregate capital ratio of the 11 corporates is 5.6%—double that reported in 2006.

The corporate credit union system today is healthy and much smaller than it was a decade ago, with total assets at only 29% of their 2006 level. Plus, almost all the potential risk has been regulated out of the system: investment rules are much more restrictive and the average capital ratio is well above 2006 levels.

Thus, the fund experiences during the financial crisis bear no resemblance to the conceivable range of possible experiences in the current reconfigured corporate credit union system.

NEXT: A temporary increase

Over the past 30 years, the fund has operated above 1.20% without much difficulty. While it was not always an ideal situation—there have been premiums assessed—absent the corporate crisis, there was never any other event that remotely appeared to be a crisis.

As such, we have consistently expected the 2017 increase to be temporary, dropping back down to 1.30% when the corporate situation was unwound.

The crucial issue is the level the equity ratio should be to preclude the necessity of a significant premium during a time of economic stress for credit unions. The complete avoidance of future modest premiums with an elevated NOL is simply not necessary and arbitrarily leaves one of the main tools of equity ratio management—premiums—in the toolbox.

It has been slightly more than 30 years since the fund was capitalized in its current form, with credit unions contributing 1% of insured shares as capitalization deposits and the fund’s retained earnings making up the balance.

Since share insurance deposits are topped off each year at 1% of insured shares, maintaining the fund in its normal operating range required net income sufficient to keep the retained earnings of the fund between 0.2% and 0.3% of insured shares for most of this history.

The amount of net income required depends on the growth rate of insured shares. The primary source of fund income is interest earned on the fund’s total assets: the sum of the 1% deposits and retained earnings.

The other available source of income is a premium assessment. The two primary expenses of the fund are operating expenses and insurance losses.

For almost all its history, interest earnings have been sufficient to cover operating expenses and insurance losses and to keep retained earnings between 0.2% and 0.3% of insured shares. In fact, in the first 20 years of its operation, the fund had to pay a dividend seven times to avoid exceeding the 1.3% NOL.

Proposed changes to the insurance fund are solutions in search of problems.

In the past 10 years, the fund would have paid a dividend three times except for the fact the TCCUSF had an outstanding loan from Treasury, which requires that any excess over 1.3% be paid to the TCCUSF.

The fund has needed to impose a share insurance premium only three times since it was established in its current form: an 8-basis point (bp) premium in 1991 and respective 10.3 bp and 12.4 bp premiums in 2009 and 2010 following the Great Recession.

In summary, during the fund’s 30-plus-year history, it has paid a dividend approximately one third of the time while a premium has been required only 10% of the time.

It has never ended a year with an equity ratio of less than 1.20%. The lowest year-end ratio has been 1.23%, which occurred in 2009. On two occasions a premium was required to maintain the 1.20% ratio.

The past practice of NCUA has clearly been to levy an insurance premium only when not doing so would have left the fund with an equity ratio nearly at or below 1.21%.

For almost all its history, the fund’s NOL has been set at 1.30%, which also is the level above which Congress has stipulated that a premium cannot be charged. This strongly suggests that Congress believed a NOL above 1.30% was unlikely to be necessary.

Had Congress anticipated that an NOL above 1.30% might be likely, it would have granted the NCUA the power to charge a premium at equity ratios above 1.30%.

As stated in our 2017 letter to the NCUA, we supported a temporary increase in the NOL of 4 basis points (to 1.34%) to account for legacy asset volatility. Based on a variety of factors, we reiterate our call for the NOL to be returned to 1.30%, which has historically served the NCUSIF well.

The NCUSIF remains strong. The fund’s pre-pandemic equity ratio stood at 1.35% and finished 2020 at a historically robust 1.26% reading despite massive fiscal stimulus that led to a 20% surge in insured shares during the year.

NCUA projected the equity ratio would fall to 1.22% at mid-year 2021. But the fourth quarter’s 1% deposit true-up, which is based on mid-year insured shares at the nation’s largest credit unions, should mean the fund equity ratio will end the year at 1.25% or modestly higher—even with above-average insured shared growth arising from the expanded child tax credit. 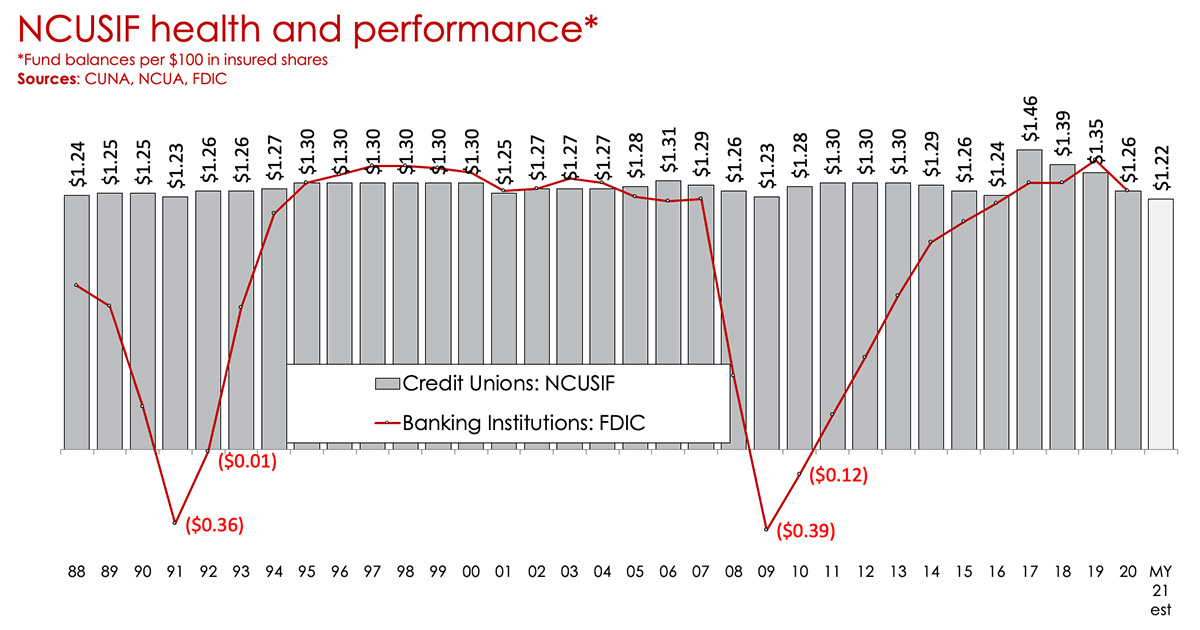 A few small credit unions have failed during the pandemic, but the impact on the insurance fund has not been significant. Also, the number of credit unions with weak CAMEL scores remains unchanged.

While some credit unions serve the commercial real estate, leisure and hospitality, and energy industries, there’s no evidence there will be significant disruption to these industries that would impact the insurance fund.

The continued expansion of the economy and labor market supports this view.

Given the fund’s health and its historically favorable performance, CUNA opposes recent remarks of several NCUA officials, including Chairman Harper, which suggest NCUA may need to charge a NCUSIF premium in the near future and/or that statutory changes to the NCUSIF funding guidelines and NOL are needed.

The Federal Credit Union Act provides that the NCUA Board may assess a premium charge only if the NCUSIF’s equity ratio is less than 1.30% and the premium charge does not exceed the amount necessary to restore the equity ratio to 1.30%. This process has served the NCUSIF and the credit union industry well.

While there is a statutory process in place to ensure the fund is restored if it drops below 1.20%, the agency’s boards over the years have actively managed the NCUSIF to maintain it at healthy levels.

CUNA specifically opposes any legislation that:

As we’ve outlined in recent correspondence with the agency, we believe such proposed changes are truly solutions in search of problems.

Such a drastic, unnecessary approach is inappropriate because there is no apparent problem with the NCUSIF that is begging to be fixed, the historical performance of the NCUSIF relative to the FDIC’s Deposit Insurance Fund is very favorable, and the NCUA Board has at its disposal the tools it needs to properly maintain the NCUSIF.

MIKE SCHENK is chief economist and deputy chief advocacy officer for Credit Union National Association. This article provides an update to a CUNA white paper that addresses the insurance fund.