A missile capsule taught Steve Schmitz about books and people.

Steve Schmitz has spent a lot of time underground.

Schmitz was a missile launch officer while stationed at Grand Forks (N.D.) Air Force Base. With a crew partner, Schmitz would pull 24-hour shifts in a musty underground missile capsule equipped to launch intercontinental ballistic missiles.

“We never launched a missile, so there was a lot of downtime,” says Schmitz, president/CEO at $1 billion asset First Community Credit Union in Jamestown, N.D. “You could eat and sleep down there, but one of you had to be awake all the time.”

He made good use of the downtime, earning his master’s degree and reading 300 books—ranging from classic and fantasy tales to espionage novels by Tom Clancy—and conversing with his crew mate.

Schmitz joined the Air Force ROTC while an accounting major at North Dakota State University. The decision gave him direction and accountability in college, he says.

He was commissioned as a second lieutenant after graduating in August 1989 and was sent to the Grand Forks Air Force Base. In 1994, he transferred to a base outside of Colorado Springs, Colo., and worked for Second Space Operations, where he ran GPS satellites.

He remained in Colorado until he left the Air Force as a captain in June 1997. 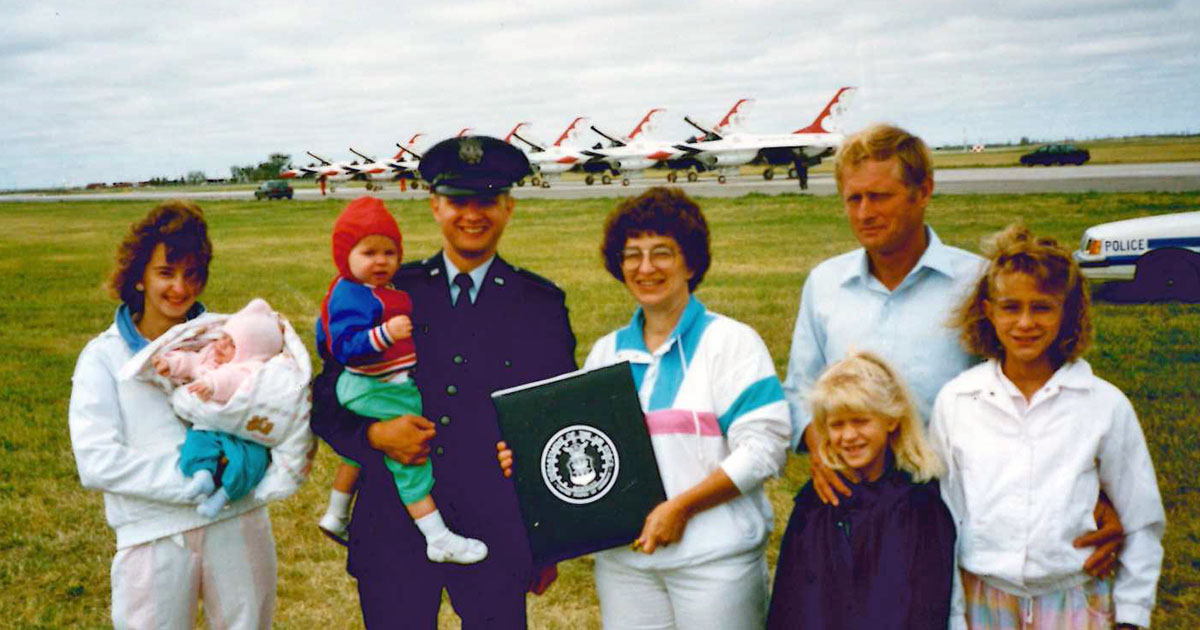 The lead pilot from the United States Air Force Thunderbirds administered the oath of office for Steve Schmitz during his promotion to second lieutenant.

While most of his Air Force career was spent in “behind the console and fight from afar type positions,” Schmitz says he learned valuable information about training and processes. However, the biggest lesson learned involved people.

“When you’re spending 24 hours underground with people, you got to know them,” he says. “You closed the blast door between you and the rest of the world and then it was just you and your crew partner. And you talked. Very seldom did they match up with your preconceptions.”

While at Grand Forks Air Force Base, Schmitz says he had two commanders with very different leadership styles. One was authoritative and it was “his way or the highway,” while the second was approachable and team-orientated.

“The first one you worked for because you had to, and the second was because we wanted to,” Schmitz says. “People want to be a part of something greater. They want to be part of a team.

“In the military, you can be the authority because people have to follow you,” he continues. “In the civilian world, they do not, and that really stuck with me.”

This article is part of A Salute to Veterans, CUNA News' special focus on military veterans in the credit union movement, sponsored by FIS. Search for the hashtag #SaluteToVeterans to follow the conversation on Twitter.