Security, branch evolution, consumerization, and big data will drive CU technology decisions through 2014 and beyond.

Security, branch evolution, consumerization, and big data will drive CU technology decisions throughout 2014 and beyond.

“It’s a never-ending battle with evildoers,” says Reh, chief information officer for $401 million asset Nassau Financial Federal Credit Union, Westbury, N.Y., and a member of the CUNA Technology Council Executive Committee. “For every sophisticated tool we come up with to protect credit unions and our members, it’s just a matter of time before criminals find a way around it.”

Security is one of the trends that will most affect credit union technology in the months to come, according to Reh and a group of his fellow CUNA Technology Council members. Others include the transformation of branches, the consumerization of information technology (IT), competition, and big data.

Technology innovation will continue at a brisk pace, Reh says, particularly in these five areas.

Despite the high-profile Target breach and growing risk of cyberattacks, many financial institutions remain unconcerned about exposure to such risks.

About half (48%) of community financial institutions say they’re only moderately concerned about their vulnerability to cyberattack, according to KPMG’s 2013 Community Banking Industry Outlook Survey, while 29% are only slightly concerned. Plus, more than one-third of survey respondents are unsure about the frequency of cyberattacks against their institutions.

But security breaches can have consequences even when credit unions aren’t directly involved. With the Target debacle, many credit unions had to weigh their options when helping affected members.

Some credit unions blocked all of their card accounts and reissued the cards to reassure skittish accountholders and minimize the risk of fraud. Others took a more nuanced approach.

“We offered the option to order replacement cards, but we made members aware they could wait until their holiday shopping was finished,” Reh says. “It’s hard to get cards into members’ hands quickly at that time of year, even if you do an instant issue.”

Another concern, especially with the proliferation of online services, is distributed denial of service (DDoS) attacks. That’s when a hacker, remotely controlling virus-infected computers, called zombies or bots (a group of which makes up a botnet), causes them to send a flood of data to a website, application, email system, server, or other online tool.

The targeted system ties up its resources responding to the deluge and often becomes unavailable to legitimate users. Such attacks often aim to cover attempts to steal account information or commit other crimes.

As members do more business via mobile devices, their desire for in-branch service decreases.

“They’re more comfortable with self-service, like airport check-in at a kiosk or self-service retail checkout, than with face-to-face interactions,” Reh says. That sparks a trend toward tellerless transactions at advanced ATMs, which can do almost everything tellers can: dispense cash, produce digital images of checks—even answer questions.

As a result, branches need fewer staff, “and employees can focus on more complicated services such as lending or financial advice, where members need a personal touch,” Reh says. “Then, credit unions can reduce the number and size of their branches and reduce costs.”

That would mean fewer tellers and, potentially, shorter teller hours. And as members gravitate toward mobile devices to conduct transactions, credit unions might be able to open fewer drive-through lanes which video tellers could staff from a central office.

“It’s our aim to make our self-service channels as delightful to use as possible,” he says. “That drives up use in those channels and frees up branch staff to spend more quality time with members, helping them improve their financial lives through investments, refinances, and other services.”

NEXT: The consumerization of IT

3. The consumerization of IT

Like members, employees generally are familiar with technology and are accustomed to having go-to apps, websites, and services that make their lives easier. They sometimes draw on these tools at work to help members and to improve their efficiency.

This has fueled the “consumerization” of IT, Reh says, wherein credit unions and other businesses embrace technologies initially developed for consumers.

Mobile devices now affect every aspect of corporate and personal life. With millions of mobile devices sold each year, smartphones and tablets are inescapable.

Plus, mobile payments are increasing exponentially, fueled largely by members of Gen Y. Credit unions should consider two aspects of consumerization, Barker says: The impact of employees’ use of their own technology and the credit union’s expectations regarding what staff should or shouldn’t be able to do with their devices at work.

“Employees want our credit union systems to be as easy to use as their iPads or other devices they use at home,” he says. “It’s the same for members. They now expect to use a tablet or go online for formerly branchonly services.”

Mountain America recently gave members the ability to enroll in online mobile banking via mobile devices. Previously, members had to create accounts online before being able to use the credit union’s mobile apps.

“Some people have dropped their PCs altogether and want to run their lives from a tablet,” Barker says. “They don’t even want to go to our website—they want to use our apps for everything. We also want the ability for potential members to simply download our apps and open an account right there.”

Another innovation in the works at Mountain America is an iPad teller platform employees can use in branches when lines get long.

“Employees will be able to pull people out of line and use iPads to for certain transactions,” he explains. “It’s another example of consumerization pushing into the enterprise.” 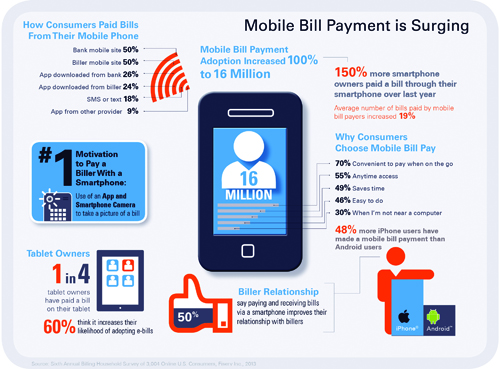 “Until recently, credit unions and banks dominated that market,” he says. “But now, more big players will compete for members’ transactions and the resulting interchange income.”

As players such as Apple, Google, Target, Walmart, and American Express make inroads into the payments space, credit unions will have to fight harder for interchange income and be creative in finding other sources of income, Barker says.

Plus, “if competitors offer something you don’t, such as remote deposit capture, you may have to follow suit to remain competitive,” Reh says. “If your members want that convenience, they might leave you if you don’t provide it.”

Information management presents a challenge, but one that’s rife with opportunity.

“There’s so much information available to us through our customer relationship management systems, our core processing systems, and social media,” Reh says. “We need to figure out how to use that data to engage members and create deeper relationships. We need to make offers for products and services members may not know they need.”

Credit unions also need to better leverage their social media. “We need to use social media as a tool to help members improve their financial lives, not simply to have a social media presence,” Reh says.

There’s certainly no lack of available data: The world produces as much data in two days as in the previous 5,000 years, says Peter Halenar, vice president of strategic partnerships for MoneyDesktop.

This provides a potential treasure trove of information if it’s interpreted properly. Among other industries, predictive policing helps police departments target areas where crime is on the rise. Netflix analyzes usage patterns of its 30 million customers each day to recommend movies or other content. Retailers target advertising to customers based on their recent purchases.

Financial institutions can use big data to track when, for example, members will need auto loans, mortgages, or other services. Credit unions also can determine which members are banking elsewhere and make detailed counter offers.

“When you learn to corral that information and turn it into actions that benefit your credit union,” Halenar says, “you’ll gain wallet share, increase membership, and turn more people into the all-important primary financial institution members.”

Technology today poses both endless possibilities and a baffling array of options. The trick, Reh says, is to focus on your credit union’s strategy first and select the technologies that serve strategy.

Technologies are the tools, he says, not the drivers.

JUDY DAHL is a free-lance writer based in Madison, Wis.