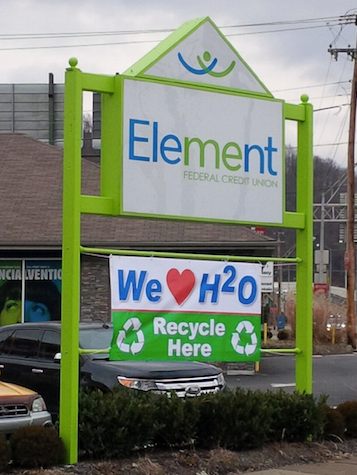 Element Federal Credit Union can’t do anything to restore West Virginians’ trust in their water supply following what locals have dubbed the “Aquapocalypse.”

But in the wake of a Jan. 9 chemical spill that continues to produce anxiety among the 300,000 people affected, the environmentally conscious credit union devised a way to make life easier for members and nonmembers alike while minimizing further negative impact on the environment.

The $27 million asset credit union in Charleston, W.Va., has promoted itself as a recycling collection point for empty containers of bottled water. The response from residents and nearby businesses has been tremendous.

Many people in the nine-county area affected by the spill continue to rely on bottled water for drinking, cooking, and hygiene. That’s produced a lot of plastic waste in a region where recycling centers, rather than curbside pickup, is the norm.

“The recycling program has given people peace of mind,” says Miranda Nabers, marketing director at Element Federal. “It’s one less thing they need to worry about.”

The credit union prides itself on being an environmental steward. Element Federal runs a paperless operation, Executive Vice President Samantha Painter points out. So when credit union employee Lisa West pitched the recycling center idea shortly after the spill, it was an easy sell.

The credit union’s social media following spiked, thanks to announcements of its recycling service. Leadership is considering whether to turn the credit union into a permanent recycling hub.

West Virginians, Nabers says, are creative and persistent: “We’re going to get it done, and we’re going to make the best of the situation. You see neighbors helping neighbors. There’s a lot of community spirit going on.”