CUs must exert their influence on one of NCUA's most important regulations in some time.

NCUA’s proposal on risk-based capital for “complex credit unions”—which translates to credit unions with more than $50 million in assets—represents one of the most important regulations the agency has developed in quite some time.

At press time, NCUA’s comment period on the proposal was open until May 28. (For the latest developments on this issue, visit cuna.org/rbc.)

The rule is significant because it would replace the current risk-based net worth approach with one more closely aligned with Basel III’s risk-based capital requirements for community banks. NCUA designed the proposal to address interest-rate, credit, and concentration risks at credit unions.

Under the proposal, a complex, well-capitalized credit union would need to meet not only the Federal Credit Union Act’s required 7% net worth ratio, but meet or exceed the proposed 10.5% risk-based capital ratio as well.

The risk-based capital ratio would be calculated by dividing the risk-based capital ratio numerator—made up of capital elements such as undivided earnings, equity from a merger, net income, and the allowance for loan and lease losses (limited to 1.25% of risk assets)—by total risk-weighted balance sheet and off -balance sheet assets. NCUA is proposing risk-weightings for assets in the denominator.

CUNA's Risk-Based Capital Action Center, which includes a variety of resources, including a new blog.

First, NCUA hasn’t sufficiently justified the need for the rule. Over the past couple of years, the agency developed rules that applied broadly but addressed problems experienced by only a limited number of credit unions.

The rule, granting NCUA greater oversight of credit union service organizations (CUSO) and adopted in November 2013, is an example of agency overreach. The agency shouldn’t overextend its authority for a rule on risk-based net worth, either. The Federal Credit Union Act stipulates that NCUA’s system of prompt corrective action (PCA) must be comparable with other federal financial regulators’ systems. But the Act also directs the agency to consider the cooperative nature of credit unions when designing its PCA approach.

Whatever new risk-based net worth rule NCUA adopts must be well-tailored to reflect credit union differences from community banks. It also must avoid undue limitations on credit unions’ ability to offer products such as member business loans or mortgage loans. The current proposal falls short of that directive. Some of our concerns include these three points:

Under the proposal, the agency specifically notes a decision to require more capital from a particular credit union “cannot be determined solely through the application of a rigid mathematical formula or wholly objective criteria. The decision is necessarily based, in part, on subjective judgment ground ed in agency expertise.”

That language is scary—very scary.

CUNA’s Examination and Supervision Subcommittee reviewed the rule in depth and directed the development of CUNA’s comment letter to NCUA. It coordinated its response with its credit union members, the leagues, and CUNA Councils to identify all issues of concern and develop recommendations that protect credit unions’ interests, such as pushing for a long delay in the implementation.

The power of advocacy 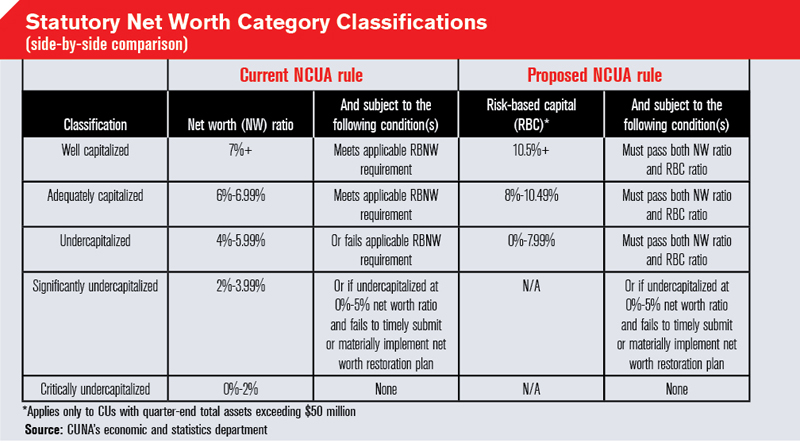 If and when regulators have the will, they can change final rules, regulatory proposals, and supervisory processes for the better.

NCUA’s final rules on charitable donation accounts and derivatives authority represent good examples of proposals that originally missed the mark in terms of authority for credit unions but improved due to persistent, reasonable, fact-based advocacy from CUNA and others.

Mobilizing the credit union system to counteract the risk-based net worth proposal is the key to changing that rule and other regulatory proposals. Regulatory advocacy has been shown to produce positive results for credit unions.

Credit unions can count on CUNA and the leagues to press regulators aggressively and pursue changes that will result in more favorable regulations and an improved regulatory environment for credit unions and their members.

The RBC proposal: What you need to know from CUNA on Vimeo.