The building is the stage and the employees are the cast. 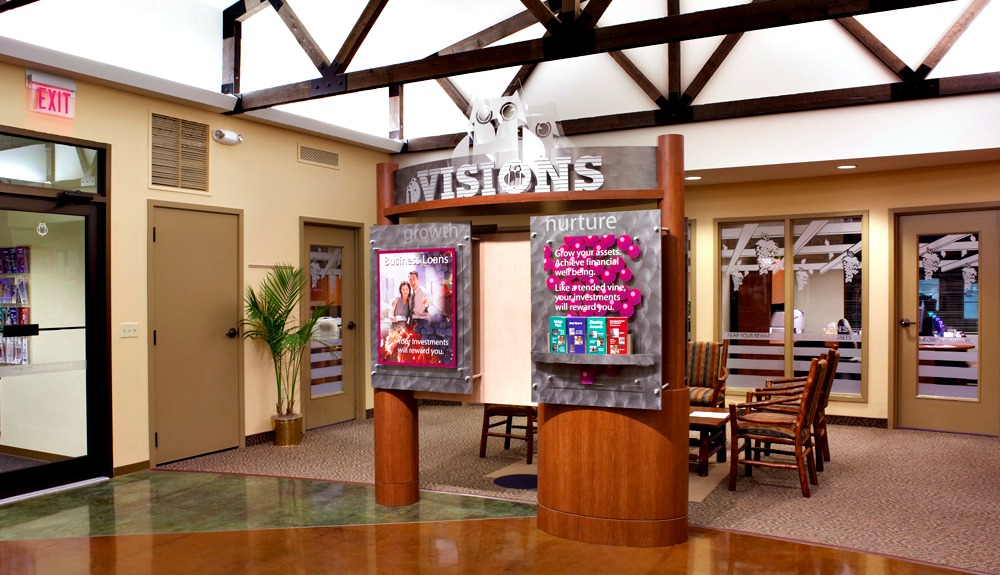 Visions FCU's branch in Watkins Glen, N.Y., features an area for casual conversation, and its motif reflects the vineyards in the surrounding Finger Lakes region of the state.

Branch design has evolved considerably in the last decade as credit unions adapt to consumer behavior in an increasingly digital financial world.

This conversation focuses on the impact of innovations at retail outlets on credit union branch design. The second part of this conversation will center on the technology driving branch usage and design now and in coming years.

CU Magazine: Can you briefly describe some of your branches?

Darling: Historically, we aimed to complement the local community by adopting a theme or unique design approach that blended with the local culture. Located in the heart of New York’s Finger Lakes wine region, our Watkins Glen branch has a vineyard décor complete with grapevine graphics and mosaics.

Another location in a rural area known for sport fishing and hunting has a lodge-type design with rustic wood and brick attributes, including a fireplace.

CU Magazine: How critical is it for designers/builders to understand a credit union’s operational aims and staffing models?

Lisa Darling: Their understanding is essential. Member service, operational efficiency, and safety are all key to effective design. Local demographics also come into play. A branch located in an underserved, rural community might lend itself to a slightly different design vs. a branch located near a large city or college.

CU Magazine: What are the biggest recent changes in branch design?

Maness: The buildings are smaller—far fewer transactions occur in-branch, with ATMs, cell phones, and other channels widely available. Branch traffic is 60% less than in the past. Branches are still vital, but what occurs there is changing.

As we’ve learned from Disney, the building is the stage and the staff is the cast. We can structure the environment, but the employees are critical.

Staffing can be flexible, with fewer employees per branch and more technology. There’s a push toward “universal associates” that do “triage” when you come in the door and figure out where you hurt.

If you need to cash a check, they show you how to go through that plaza. Or if you need a car loan, they take you into an office. The Apple store has universal staff—you can instantly identify them in their blue shirts, and any employee can solve your problem.

In every other retail outlet you go to, you’re greeted by someone standing up, and that’s affecting branch design in a large way. People are no longer sitting at desks; they’re capturing members when they enter the door.

Some credit union clients want that to happen in three steps. First the greeting, then determining where they hurt, and moving to the appropriate area from there.

That’s not true for all credit unions. If you go back 10 years, they all had traditional teller lines. Now about 75% still do, but the technology on the back side is different, with things like cash-handling equipment.

Maness: Enhancement of the transaction with self-service checkout. Self-service has a big role in financial institutions.

When a member walks up and asks a teller to cash a check, it’s the most expensive transaction type, costing about $4 vs. about $0.08 at a self-service kiosk. We’ll get to a point in the future when people only go to a branch to solve problems or open an account. They’ll have peer-to-peer transfers if, say, I want to pay you for half the cost of dinner.

Here’s another Apple analogy: Every product they sell, you see in their stores. There’s nothing in the back room. It’s all tangible; you can pick it up and look at it.

In credit union branches, however, you’re only exposed to one or two products; maybe car loans, Visa cards, or mortgages. Why don’t you see insurance, wealth management, and stock purchasing? They’re not making it tangible.

On insurance commercials with the character of Flo, there are boxes of auto insurance and other insurance products. For financial products, like share certificates, how do you make it tangible to the bottom 50% of wage earners?

One credit union is using boxes, displaying an initial supply of checks, a register, and the holder in a box to promote checking accounts, for example.

Darling: We’re adopting an inviting, open-design floor plan that provides the member with options. When a member enters a branch, we attempt to present service choices. Whether it’s self-service technology, platform services, or teller services, the options are visible and accessible.

We tailor each branch to its location. Our University Plaza branch in Vestal, N.Y., is a good example. Located next to Binghamton University’s student housing complex, the branch speaks to the student population through its Gen Y décor and furniture.

From the beanbag chairs in the waiting area to the floor-to-ceiling telephone pole in the lobby—which students use to post announcements and current publications—the tone is fun, yet collegiate.

CU Magazine: What other touches set the proper tone for the newfangled branch?

Maness: You want to choreograph where members move. They typically look and move to the right, so they might not see products on the left. Create a trail for them to follow.

People are busy, and never pick up brochures where they fill out forms. So put a poster where they walk. Because they’re moving, you may have to pique their interest with two words.

The Department of Transportation does it well—on the Interstate a blue sign with a picture of a fork and knife means a restaurant. Why not do something similar with CD rates?

¶ Stay tuned: Check back soon for a discussion on how technology affects branch design